SCREEN GRABS The big noise commercially this week is Spider-Man: Far From Home, yet another entry in the most confusingly overpopulated movie franchise of the still-new century. Not counting TV series and/or animation, let alone videogames and other media, this is the seventh SM movie in just 17 years, with the third Spider-guy (Tom Holland, who followed Andrew Garfield, who followed Tobey Maguire) within that number. That all seems crazy redundant excess to me. But these movies make money—they must, since they cost a fortune to make.

For massive spectacle of a much more time-consuming but infinitely more rewarding sort, you can spend eight hours either Sat/6 or Sun/7 watching the 1966 Russian super-production War and Peace, which returns to the Castro after last month’s sold-out single show. (More info here.) You’ll be ready for Czarist Russia after 136 minutes in dusty outer space with David Lynch’s Dune, the infamous 1984 Christmas flop based on Frank Herbert’s classic sci-fi novel. Poorly received by critics and fans alike at the time, it’s still highly problematic, with purportedly superior alternative edits floating around out there. (Painfully sandwiched between two of his greatest successes, The Elephant Man and Blue Velvet, Dune remains a personal disappointment that Lynch prefers not to discuss.) Nonetheless, it’s acquired some champions in the decades since, and will be screened by Midnites for Maniacs at the Roxie in a 35mm print of the original theatrical cut. Thu/4, Roxie. (More info here.)

Another newly-restored revival of note is the a new run (at Opera Plaza) of Jennie Livingston’s 1990 Paris Is Burning, the star documentary of the “New Queer Cinema” epoch. (Among the other talents it introduced were the subsequently Oscar-nominated likes of Far From Heaven’s Todd Haynes and The Kids Are Alright’s Lisa Cholodenko.) It chronicles the late 80s NYC underground of competitive voguing at “balls,” which provided a creative outlet for primarily African-American and Latino gays at the height of the AIDS epidemic. It’s a terrifically entertaining and insightful record of a singular scene. (More info here.) 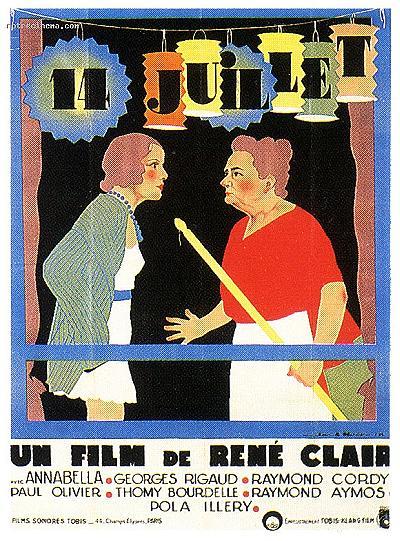 Bastille Day
As part of an occasional series expanding on its successful programming of noir-ish vintage French films into other genres, especially comedy, the Roxie is showing this 1933 Rene Clair joint. Pugnacious taxi driver Jean (George Rigaud) and flower salesgirl Anna (Annabella) are a combative yet devoted couple living across the street from one another in a working-class Parisian neighborhood. Their romance is one of constant eyeblink stops and starts, tiffs and reconciliations in the film’s charming slice-of-life first section.

But then Jean’s bad-news old girlfriend (Pola Illery) turns up, causing all sorts of problems, and turning the movie from a slice-of-life comedy into something considerably more ambitious (and melodramatic). All the tonal changes work, however, finally bringing things charmingly full-circle. Annabella became one of France’s biggest stars of the decade, eventually being lured to Hollywood, where she married Tyrone Power. Regaud was at the very beginning here of a half-century screen career all over Europe. Clair would also travel well, making some equally delightful movies in America and England. This is one of those films that makes the history of cinema seem short, rather than long—it’s ambitious and sophisticated in ways that haven’t dated very much at all. Thu/11, Roxie. More info here.

Maiden
One of those “gentleman’s sports” still almost absurdly governed by wealth and class for our era, yachting was verrrrrrry slow to integrate gender-wise. This excellent new documentary by Alex Holmes, one sure to end up on best lists and in awards consideration at year’s end, chronicles the efforts of the first all-female crew to compete in the Whitbread Around the World Race (since renamed simply The Ocean Race) thirty years ago. Their driving force Tracy Edwards wasn’t from a privileged background, even, being a teenage runaway who landed in a seaside town and started as an onboard cook simply to get onto boats.

Some time later, when she’d acquired sufficient sailing experience and recruited a multinational team, she found no one willing to bankroll a bunch of “girls” in this expensive endeavor until King Hussein of Jordan (an unlikely acquaintance) stepped in. Some initial blunders only heightened the horribly condescending attitude of the press towards the seagoing “ladies,” until they got their act together and began seeming real contenders in the 33,000-mile contest. With plenty of archival footage as well as participants’ latterday reminiscences to draw on, this is an exciting, suspenseful sports documentary with a potent dose of glass-ceiling-bfreaking inspiration. Embarcadero

The Chambermaid
The flipside of the warm, inclusive portrait of domestic help/domestic life in last year’s Roma is offered by this, another Mexico City-set drama about a professional housekeeper. Well, Eve (Gabriela Cartol) doesn’t exactly keep a house—she works in Housekeeping at a luxury hotel, where the attention to detail is exacting and her duties sometimes unpleasant, even inappropriate. In the opening scene of Lila Aviles’ minimalist tale, she seems to discover a elderly guest’s dead body on the floor of his room. It turns out he’s just fallen out of bed, but he’s not even nice about being woken after having given her the shock of her life.

At first Eve’s daily toil seems ordinary, between all the cleaning and the sometimes imperious demands of patrons. But eventually we glimpse that she’s got a curious streak, as well as a stand-offish nature towards coworkers that is somewhat tested by the aggressive overtures of friendship (and perhaps something else) by fellow maid Minatoy (Teresa Sanchez). It takes a long time before we begin to perceive that Eve might have a big secret or two of her own. And it’s not just that she’s never read a book. (A kindly GED-prep tutor on site gives her Jonathan Livingston Seagull.)

A study in repressed emotions whose cause is tantalizingly only semi-revealed at the ambiguous ending, this is a head-on look at an ordinary job most of us seldom think about, but also a cryptic character study whose mysteries run deeper than you originally expect. Roxie. More info here.

Jaws vs. Rollercoaster
Heal your hangover and/or sunburn from the 4th with this next-day double dose of 1970s multiplex suspense. Jaws is, of course, the trouble-plagued production that became the highest-grossing film ever to that point, virtually coining the concept of “summer blockbuster” in 1975. Steven Spielberg’s breakthrough effort trimmed the trashier elements while boosting warmth and humor in adapting Peter Benchley’s pulp bestseller about shark attacks on a New England beach community. The result was a popular triumph on every level that still holds up very, very well.

Borrowing its “We’ve got to shut this thing down before more people get killed but the greedy businessmen won’t let us” hook is the much lesser-remembered Rollercoaster from 1977. This was a late entry in the “disaster film” cycle that had hit paydirt with Earthquake and The Towering Inferno. Here, a police detective (George Segal) races to stop a mad bomber (Timothy Bottoms) before he attacks again at a theme park. Henry Fonda, Richard Widmark and Susan Strasberg are also in there, as well as very early appearances by Helen Hunt and (in a bit part) Steve Guttenberg.

Despite being exhibited with the special rumbly-noise gimmick “Sensurround” (introduced by Earthquake), it was not a particular hit (something called Star Wars kinda buried it), nor did it seem a particularly good movie at the time. But it may well have aged like fine Me Decade cheese by now. Fri/5, Castro. More info here.

Pasolini
Perhaps freed by the Oscar nomination Willem Dafoe deservedly got this spring as Vincent Van Gogh in the otherwise questionable At Eternity’s End, here’s the same actor playing another tortured artist in a movie that premiered at festivals five years ago. Incongruously not even bothering to attempt an accent, though otherwise acceptably cast, Dafoe is Pier Paolo Pasolini, the intensely controversial Italian poet, filmmaker, critic, journalist, homosexual, political contrarian, and all-around provoking public artist-intellectual. That was a particularly combustive combination in a nation still clinging to the Vatican and not long removed from Mussolini, and speculation still flies around the reasons for his violent death in 1975.

Handsome and plush, yet also with some daring aesthetic choices, iI’s an attempt at a kaleidoscopic death’s-bed summary and fantasia of a flamboyantly complex life. Something quite like Rupert Everett’s recent The Happy Prince about Oscar Wilde—an honorable but messier film that works less well. (If that film felt exhaustingly long, this one conversely feels a bit too short, as if funds ran out before some major scenes could be shot.)

Perhaps the reason Ferrera’s film took so long to get released here is that it may bewilder more than enlighten viewers not already at least fairly familiar with the subject’s life and works. For for those who are, it’s no failure—it’s an impressively layered act of both homage and analysis, however incomplete, even arbitrary at times its perspective. Roxie. More info here.

Midsommar
Dani (Florence Pugh) is a very needy girlfriend, forever in emotional knots over her bipolar sister’s apparent suicidal urges, Boyfriend Christian (Jack Reynor) is about to drop her over this when her worst familial fears come true. He can’t bring himself to dump her now, and in fact guilts himself into inviting her on a planned guys-only trip to Sweden, where he and three fellow Anthropology Dept. grad students were expecting to study a remote village’s customs.

This is the second feature from writer-director Ari Aster, whose first Hereditary was one of the more striking horror movies in recent years. It was a critically praised hit, though of course mainstream horror fans were mixed about it—they’ll deny this, but really they just want everything to be a straight-up slasher film, which it wasn’t.

Those fans will really hate Midsommar, and you can’t blame them. This is a work of willful eccentricity that takes a full hour before anything “happens,” and isn’t exactly in a rush from then on, either. At 140+ minutes, it is waaaaay too long for a film that’s not as original as it thinks (The Wicker Man is one obvious model), and does not have the ideas or even suspense sufficient to sustain its greatly attenuated, slowly paced length.

That said, this isn’t just a hotshot young director’s bloated sophomore egofest, but a genuine curiosity, a sun-blinded pagan nightmare that’s kind of like Herschell Gordon Lewis’ 2000 Maniacs crossed with the disastrous 1970s musical Lost Horizon—without necessarily being as much fun as that sounds. I’d rather Aster made this kind of weirdo misfire than, say, taking the obvious next commercial step and rebooting Halloween yet again or something. Midsommar is ultimately a bad movie, but it’s not just any bad movie. It’s the kind of distinctive failure you remember, even if with a wince. Opens Tues/3 at Alamo Drafthouse, Wed/4 at other area theaters. More info here.