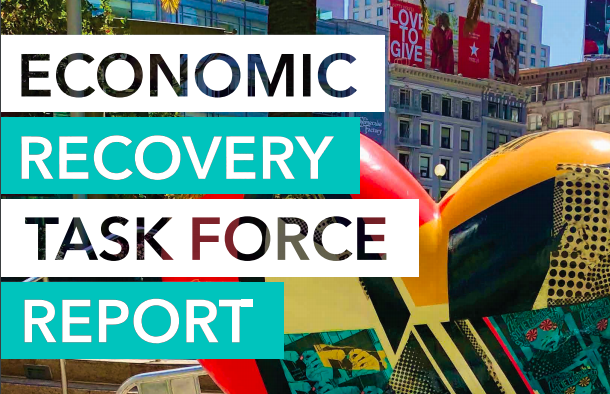 If anyone needs reminding that defeating Trump will not mean the end of Trumpism, turning to the Economic Recovery Task Force Report of the City and County of San Francisco, released on October 8th,  should do the trick.

The essence of Trumpism is governmental deregulation and public subsidy of private profit while ignoring the manifest needs of everyday people.

That is also the essence of the Task Force Report.

Claiming itself to be, in Trumpian style, “this excellent work product” the report embraces  “safe reopening of business activity,” along with “expanded …use of sidewalks, parking ,street or surface space” for businesses (but not community service uses).

It calls for “streamlining permitting processes,”  and “reducing or eliminating regulatory burdens.” Just substitute federally owned lands for sidewalks or street space and you have Trump policies.

Never mind the fact that the “safe reopening” of the economy is Trumpian non-sense without a free and accessible testing program including a robust public-sector contact-tracing capacity and a vaccination, neither of which we have anywhere in this country ,  including San Francisco.

Also never mind that using increasingly limited public revenue virtually for the sole purpose of “saving small businesses” will mean less and less public support for the workers and their families, securing their housing, the schools for their children, and a public health system that can prevent them from getting sick and treat them when they are ill.

For a report supposedly aimed at “economic recovery” to ignore rising hunger, the threat of massive evictions, and a stressed  health and human service sector is a of little real use.

The report sounds like a Trump infomercial raising the oft heard call  to ” eliminate …permits  that are not “directly related to health and safety.”  Exactly which permits are to be eliminated is left unsaid in the report.    For example, Conditional Use Permits  (see  Section 303 of the Planning Code) , endlessly denounced by developers and their toadies the Yimbys, specifically require a finding by the Planning Commission that in granting permission to exceed  existing zoning limits (yes they can be exceeded but only after public notice and a hearing) “will not be detrimental to the health, safety, convenience or general welfare.”

Are CU’s , and the  public oversight they trigger, to be eliminated or not?

There are two fundamental problems of the report, the first in what it recommends and the second in what it ignores.

The bias of the report is made clear in Recommendation 1.3 which calls for “developers to defer paying impact fees to stimulate development.”  The report makes clear that the principal impact fee to be deferred is the recently increased levy for affordable housing.

This is not a new suggestion — affordable housing fees from both commercial and market rate housing development were suspended during the Great Recession, from 2010 to 2013, by Mayor Newsom with the agreement of the Board of Supervisors. Only Chris Daly opposed the legislation.

The impact of that suspension on the production of affordable housing was devastating and lasted nearly a decade.

In 2008, the last full “normal” year of fee collection from office and market rate housing developers before the waiver, some $21 million was collected from local developers and 1,096 permanently affordable homes were built or acquired. It was not until 2017 that that production figure was matched or exceeded.  The numbers tell the story:

The years between 2008 and 2017 saw the greatest displacement of low income people — estimated  at least 300,000 San Franciscans — in the city’s  modern history, vastly outpacing the urban renewal years of the late 1960s. The reduction of affordable housing production caused in part by the fee waiver could have offered thousands of these San Franciscans a chance of staying in their hometown.

To recommend a repeat of that civic disaster as a course to economic recovery is not supported by either historical or contemporary facts. Given the fact that we face a huge vacancy rate in both office buildings and market-rate housing, reducing development of affordable housing in order to “stimulate” market-rate housing is not only economic malfeasance but also municipal madness. Non-factual, hope based economic policy is the earmark of Trumpism.

But even worse is what the report fails to address: any recommendation to avoid the collapse of Muni.

Of the 41 specific recommendations in the report, not one addresses rebuilding Muni. The only data on public transit in the report details the decline of BART ridership — which at its peak was less than half the daily ridership of Muni.

SFMTA leaders were not even members of the task force, and of the 50 city department “support staff” listed in the report, only one is from the MTA (while the business friendly Mayors’ Office of  Economic and Workforce Development not only had its director but also five staffers on the task force).

Now that the number of “transit corridors” has been slashed, including the tanking of every light rail route in the city that underpinned the notion of dramatic density increases in Western San Francisco, these “pro transit” voices are stilled to the point of  deafening silence.

Muni’s collapse is stunning: average daily bus boardings have fallen from some 470,000 to less than 140,000 between February  and September ( see SFMTA).  Muni revenue is down 95 percent between January and July, 2020.

The shift in who is using Muni now is also important.

In March, before the shelter in place  the top five most heavily used Muni lines were:

These numbers show the challenge ignored by the report.

First, people who have to show up for work are still dependent on Muni, while folks who can work from home are not. Second, these folks are decidedly coming from communities of color. Third, the task force report ignores their needs and prefers to address only the needs of their employers for permits!

While there are sections in the report on both “pursue economic justice” and “meet the basic needs of the vulnerable,” it seems that somehow safe, dependable, and timely public transit is neither.

Donald Trump’s lips rarely form the words “public transit,” and its funding has never been a priority of the Trump Administration. It’s deeply depressing that San Francisco follows that lead.

In 2010, the Board of Supervisors got rolled by Newsom on his “fee deferral program.” Progressives like Eric Mar, Ross Mirkarimi, David Campos, Bevan Dufty, and Sophie Maxwell voted for it. Only Daly voted no.

The recommendation to waive affordable housing fees will come before the board October 27. There’s a progressive majority on the board; let’s see if, in the era of Trump, the vote is different this time around.