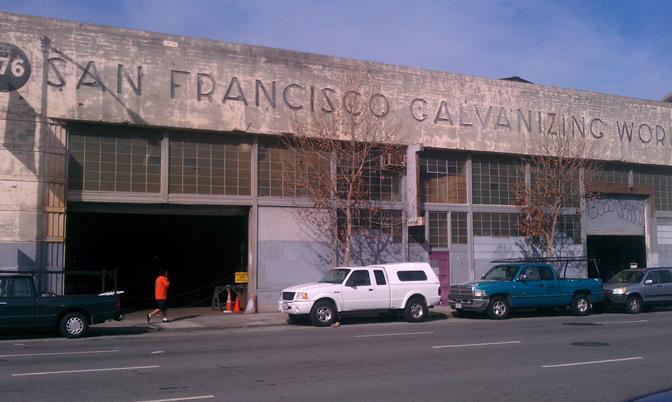 Manufacturing needs low rents – and if tech offices are allowed to intrude, it won’t survive.

But the original bill, by Sup. Malia Cohen, had some serious problems that undermined the goal of providing PDR space in a part of this city that could be overrun with tech offices – and some of those issues still haven’t been resolved.

Thanks to Supervisor David Campos’s outreach to a broad range of stakeholders, and Cohen’s recognition of unintended consequences in the draft legislation, it now looks as if an amended proposal is going to move forward.

Still, it’s a very tricky balance – and PDR advocates fear that city planners will allow developers to slide through loopholes, in part because the enforcement is likely to be lax, leading to office uses where manufacturing ought to be.

Then there’s the fact that manufacturing is low density, or, in the words of city planner Steve Wertheim’s staff report, “typically space intensive,” meaning that it generates relatively low revenue per square foot — and thus can only survive if rents are low (most manufacturers are tenants).

Manufacturing can’t compete with high-density, high-rent uses of land like apartments or office buildings. So manufacturing doesn’t pencil out for the city’s developers, especially in today’s red-hot real estate market—and commercial rent control is illegal. And because it often generates noise, odors, and truck and forklift traffic, manufacturing doesn’t go well with housing. (more after the jump)

With these formidable conditions in mind, Cohen’s original bill, co-sponsored by Supervisors Campos and David Chiu and Mayor Ed Lee, made it easier for PDR to be “co-located” or “cross-subsidized” with offices on 16 parcels north of 20th Street—all places where current zoning prohibits new, stand-alone office construction. The idea was that the office space would generate sufficiently high rent to support the low-rent PDR. 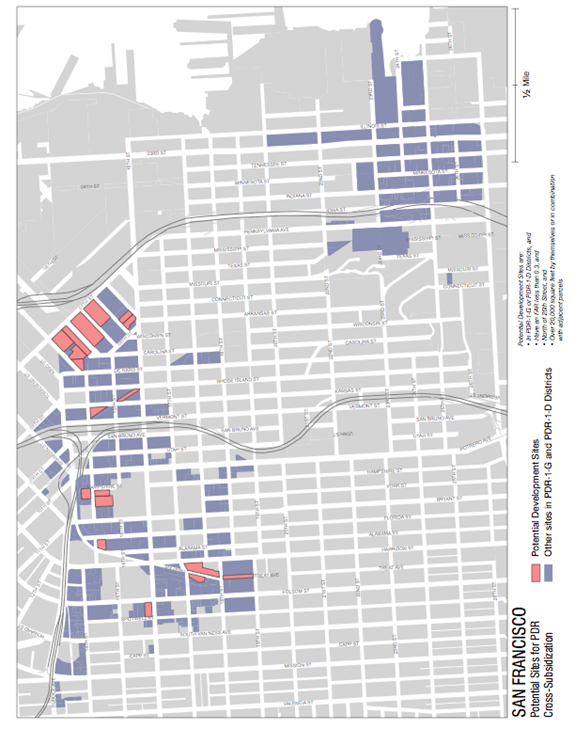 Integrated PDR, or IPDR, which combines office and PDR in a single business enterprise whose space is at least 1/3 office and 1/3 PDR and no more than 1/3 retail. (Planners talk about Dolby labs as a place that has both office and manufacturing space.) That’s currently permitted only in existing buildings.

Small Enterprise Workspace, or SEW, which involves a single, new building comprised of discrete workspace units that are independently accessed from the building’s common areas. The building may contain a mix retail and office uses, but no retail.

Both IPDR and SEW are currently permitted north of 20th Street, introduced into the city’s planning code in 2008 by the Eastern Neighborhoods Plan, but in ways that have discouraged the development of manufacturing space, especially space appropriate for the artisanal “maker” businesses that have proliferated in the city. Indeed, no building has ever been constructed as IPDR.

Cohen’s initial bill aimed at eliminating deterrents. Formulated after 18 months of consultation with the planning department, the mayor’s Office of Workforce and Economic Development, and SFMade, the energetic non-profit whose brilliant marketing has boosted local manufacturers’ cachet; the first draft included some unobjectionable provisions, including:

Other aspects of the initial draft drew heated protests from longtime advocates of PDR who had not been involved in its preparation.

At the Planning Commission’s February 6 informational hearing on the proposed legislation, Peter Cohen, co-director of the Council of Community Housing Organizations (CCHO) and the former chair of the Back Streets Businesses Advisory Board, said that although he and his colleagues had been “very active in rezoning the Eastern Neighborhoods,” they’d only found out about the bill “at the last minute.” They agreed with the bill’s drafters that “the key thing” was the need to increase PDR space — but questioned the measure’s enforceability and its benefit to the public.

Their concerns were elaborated at the February 10 meeting of the Eastern Neighborhoods Citizens Advisory Committee by CCHO’s other director, Fernando Martí, who also sits on the committee. Martí handed out a 2,300-word statement, which is posted on the CCHO website under the headline “Preserving SF’s industry through the power of magical thinking.”

“What’s the enforcement mechanism?” Martí asked. What if an IPDR project goes over the 2/3 office limit? Will the city shut down the office use?

City planner Mat Snyder replied, “I don’t know if we have a precedent. Most enforcement is complaint-based.”

“The reality,” interjected veteran land use attorney Sue Hestor, “is that there is no control on mixed projects. They [the planning staff] don’t pull the fucking files. I have to pay for research.”

Nobody, including SFMade Executive Director Kate Sofis, who sits on ENCAC, contested Hestor’s claim. Indeed, the consensus among staff and citizens alike was that the city cannot be realistically expected to enforce its zoning.

“I can give you a list of [property owners],” offered ENCAC member Toby Levy, “who will leave the PDR unrented. There’s so much demand for office space” that “we’re creating stuff that demands an enforcement mechanism.”

In SoMa, Martí observed, Class A office space is currently renting for $60 a square foot and Class B for $53. “We’re talking about 2 million square feet of office space—1½ million on 7th Street alone,” he said. “The fear is that 7th Street is going to become this tech corridor and drive up prices, and we’re not going to get the PDR spaces that we want.”

CCHO recommended slowing down the whole process. Start with a pilot project, as the city has done with micro units—say, 500,000 square feet—and see if the new PDR ordinance actually produces PDR space, and if so, how much and at what rents.

CCHO also flagged a bizarre provision in the draft bill that allowed the non-PDR in a hybrid project to include institutional uses such as child care, educational services (including student dormitories and other housing), religious facilities, residential care, and job training. Except for the last, all of these, CCHO pointed out, are “potentially problematic neighbors for PDR uses.” The only institutional activity that should be allowed, the group said, is PDR-related job training.

Only one of CCHO’s proposals received consideration from ENCAC as a whole: the need to identify specific parcels. Nor did the committee delve into any of the draft bill’s specific measures. Instead, most speakers expressed their solicitude for the city’s manufacturers.

By a vote of 11-4, the committee approved a resolution that supported “the pending…legislative reform package” and included a laundry list of “potential adjustments to the proposed changes” all of which, except one—”[consider] naming specific parcels that are eligible for the new construction ‘Inclusionary PDR’ portion of the legislation”—were vapid.

A few weeks later, things were still at an impasse. That’s when Supervisor Campos initiated conversations among all the interested parties—SFMade, the planning department, OEWD, CCHO, the Mission Economic Development Agency (MEDA), ENCAC members, and PDR business owners from Western SoMa and the Eastern Neighborhoods, and Supervisor Cohen’s office.

I asked Campos why he intervened. “The city is losing its identity,” he replied. “PDR jobs have allowed people to make a living and stay in San Francisco. It’s important that we support them.”

The upshot of the negotiations was general agreement on four significant changes in the draft bill:

On March 10, CCHO sent the planning commission a statement supporting “the evolution of the PDR amendments currently before you,” in particular the three-year hard sunset period for the new program and the elimination of Integrated PDR.

At the same time, CCHO indicated that the PDR Facilitation bill needs to evolve further, stating that

We, along with MEDA (a CCHO member organization) continue to be worried about…the potential unintended consequences of the 100% office allowance within the SEW (Small Enterprise Workspace) category, given the rise of the new tech office hub buildings that did not exist when the Eastern Neighborhood rezoning was approved in 2008. We would recommend that the Commission consider limiting the amount of total office allowed within the SEW buildings to 50% maximum office.

CCHO was referring to facilities such as ActivSpace in the Mission and the 5M Incubator in the former Chronicle building. Given the high demand for tech start-up space and the high rents (especially when compared with PDR) that such space commands, it seems likely that SEW projects would be occupied entirely by tech start-ups.

I asked Supervisor Cohen to comment on this issue. She declined to be interviewed, but her office emailed a response:

[I]f you have ever visited one of the SEW spaces (Active Space for example) you will see that there is today a mix of uses in there, including many PDR users, artists and individual hobbyists. With a 1,500 gsf cap on the space, I do not think we will see a proliferation of tech offices.

But if the Mission ActivSpace is any indication, SEW buildings will house few manufacturers: by my count, only five of the building’s 43 tenants are engaged in material production.

CCHO also pointed out the gaping disconnect between efforts to create new PDR space and the planning department’s draft Central SoMa Plan, which would remove zoning protections for PDR in the blocks between 2nd, Townsend, Bryant and 6th Street and admittedly wipe out at least 1,800 blue-collar jobs.

[T]he largest portion of parcels [in the bill] that may opt for the office space allowance are along 7th Street, in the general geography of the Townsend Street area being targeted for elimination of PDR spaces…We think it would be prudent for the Planning Department to take a no-net-loss approach to PDR space across the Eastern Neighborhoods and Western SoMa industrial lands, so the well-intended efforts to create new space do not simply result in a zero sum gain. In the coming year, as the Commission considers various options for rezoning in the Central SoMa Plan, we recommend that you keep this overall context in mind.

For one seasoned PDR advocate, the contradiction is a deal-breaker. Jim Meko, who chaired the Western SoMa Citizens Planning Task Force and now serves as president of the SoMa Leadership Council, says he “could reluctantly support” the PDR Facilitation bill “with the caveats CCHO has expressed, if it were not for the uncomfortable irony that our Planning Department staff is undermining and destroying existing PDR space a block away from many of the properties covered” in the pending legislation and shows “no indication that they are willing to reconsider their illogical direction” and go for “a guarantee of no net loss,” which “would be a sensible compromise.”

Meko concludes: “I’ll just have to take this discussion to the Board of Supervisors”—which is where the amended bill is likely to be headed after the Planning Commission hearing on March 13.