City Beat: Immigration holds, evictions – and the loss of an entire city block in the Mission 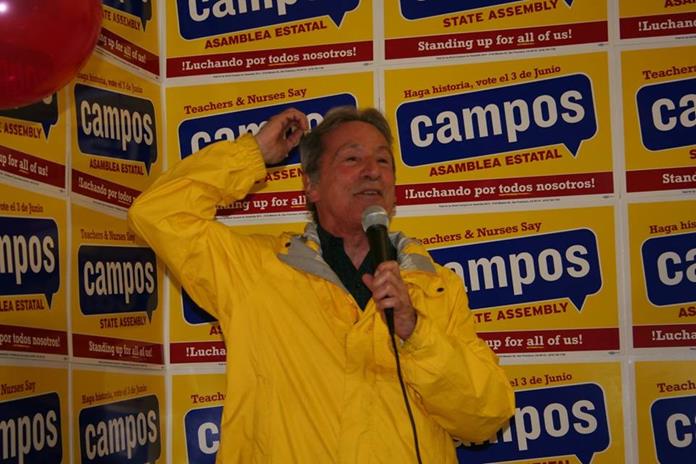 Tom Ammiano, shown here at the David Campos for Assembly kickoff, has helped stave off thousands of deportations.

APRIL 7, 2014 — Guess what? The number of people deported from California appears to be dropping, in large part thanks to a bill by Assemblymember Tom Ammiano.

The measure that Ammiano managed to get passed and signed into law last year directs law enforcement agencies not to put immigration holds on people arrested and charged with minor crimes. That means nonviolent offenders can be released from custody quickly, instead of being held behind bars and turned over to the feds.

The TRUST Act, the Associated Press says, is having an immediate and significant impact: In the 15 counties surveyed, deportation holds dropped 44 percent as local agencies stopped complying with the Secure Communities program.

Secure Communities is the federal program that calls on local police and sheriffs to scan the fingerprints of everyone arrested so that Immigration Control and Enforcement can identify candidates for deportation. Those people are denied bail or held over after serving their sentences so they can be taken into federal custody and possibly deported.

The feds aren’t saying much at this point, but Ammiano says “this is pretty much what we expected and what we wanted when I proposed the TRUST Act. Way too many people were deported unnecessarily and now the sheriffs have had to stop collaborating with that.”

Good news, even if the Obama administration is resisting calls from such radicals as the New York Times to slow down deportations until Congress acts on immigration reform.

Among those hit hard by high housing costs in San Francisco are public school teachers, who don’t make tech-level salaries and are finding it harder and harder to live in the communities where they work. Now at least four teachers in the Mission are facing Ellis Act evictions, and Eviction Free San Francisco is holding a rally and March this Friday to call attention to the latest housing outrage.

At 812 Guerrero, Claudia and Evan, two teachers, are facing the Ellis Act. So is Sarah, a teacher who lives at 55 Dolores – and her friend Mary, who just had her 98h birthday. Yes, Urban Green, one of the Dirty Dozen (the city’s worst serial evictors) is throwing a 98-year-old woman out on the streets. At 151 Duboce, Benito, a special ed teacher, is being Ellised.

So bring yourself, your kids, your supporters, show up at 20th and Dolores April 11 at 5 pm.

The landlord-and-speculator lobby will be out in force tomorrow when Sen. Mark Leno’s bill to limit Ellis evictions in San Francisco gets its first committee hearing. It’s at the Transportation and Housing Committee at 1:30, and Tenants Together is holding a rally at the Capitol Building at 12:15. Sign up for a carpool here.

And if you can’t make it to Sacramento, or you can figure out how to be two places at once, a bill by Sup. David Campos to increase Ellis relocation fees is at the Board of Supervisors, where there’s an attempt to water it down that tenants will be trying to fight off.

When I read about these sorts of evictions, I think about meetings that I’ve gone to with tech-industry people and tech folks who I’ve talked to, and a lot of them agree that the city’s being damaged by evictions, and some are actually trying to help in Sacramento. But there’s a critical thing that so many are missing, and it goes like this:
If nobody buys a TIC that’s been created by the Ellis Act, there won’t be any incentive to do evictions. So Number One on the list of things tech people can do to help San Francisco is DON’T MOVE INTO A UNIT THAT SOMEONE WAS EVICTED TO CLEAR OUT FOR YOU. If you aren’t sure how that spanking new TIC got on the market, call any of the tenant advocate groups in town and they can tell you if someone was Ellised out.

If you can’t do that, you aren’t really helping (no matter how many hours you volunteer at a nonprofit that most likely needs your money more than your time.)

I’m surprised that there’s not more outrage over a plan to demolish an entire block of the Mission for high-end housing. Mission Local did a good job on the story, pointing out what will be lost (artist space and productions, distribution, and repair space) in exchange for 276 rental units, 44 of them below-market-rate.
The Eastern Neighborhoods Plan, sadly, allows luxury condos and apartments to replace PDR uses, which is why it’s so critical to save what’s left of PDR in other parts of town.

I used to work right near 18th and Bryant, and I remember another plan to build a massive project right down the street. Then-Mayor Willie Brown gave the go-ahead to a highrise office building (yes, a highrise office building in a residential part of the Mission), the Planning Commission rubber-stamped it, the Brown-dominated Board of Supervisors looked the other way – and the developer evicted an artist colony where more than 100 painters, photographers and other visual artists had inexpensive studio space.

This was called progress.
The studios were torn down, the developer dug a big hole in the ground … then the market for office space crashed and it sat empty, filling up with water, for years.
There’s still a lot of cool stuff around 18th and Bryant, but once a couple mega-projects like this come in, much of it will be forced out. Who want to bet City Planning does a neg-dec and tells the developer that, like the Google Bus Project, this can happen without so much as an EIR?

SFMTA sold drivers expensive permits, then let Uber and Lyft undermine the industry. Now the permits are worthless—and the city is doing nothing.
Read more
The Agenda

Those high-tech scooters on the streets are hurting pedestrians

Plus: Sick leave for domestic workers, an update on Dream Keepers—and what's up with the city's Climate Action Plan anyway? That's The Agenda for Dec. 6-12
Read more
Puff

Puff: Get high for the holidays with our cannabis gift guide (part one)

High-fashion pipes, backpack bongs, and the yummiest dead-rocker gummies you ever did try.
Read more

How Chronicle Books has survived the pandemic’s wild ride

Why don't the local media, so happy to attack the DA, fact-check an ad that is blatantly false and kind of ridiculous?
Housing

Why are both Republicans and Democrats so obsessed with Cuba?

After more than 60 years, the US is still trying to overthrow the government of a small island nation that is no threat to us.