Books: ‘Pura Neta,’ the Mission, and the price of gentrification

An interview with author Benjamin Bac Sierra on his new and powerful novel. 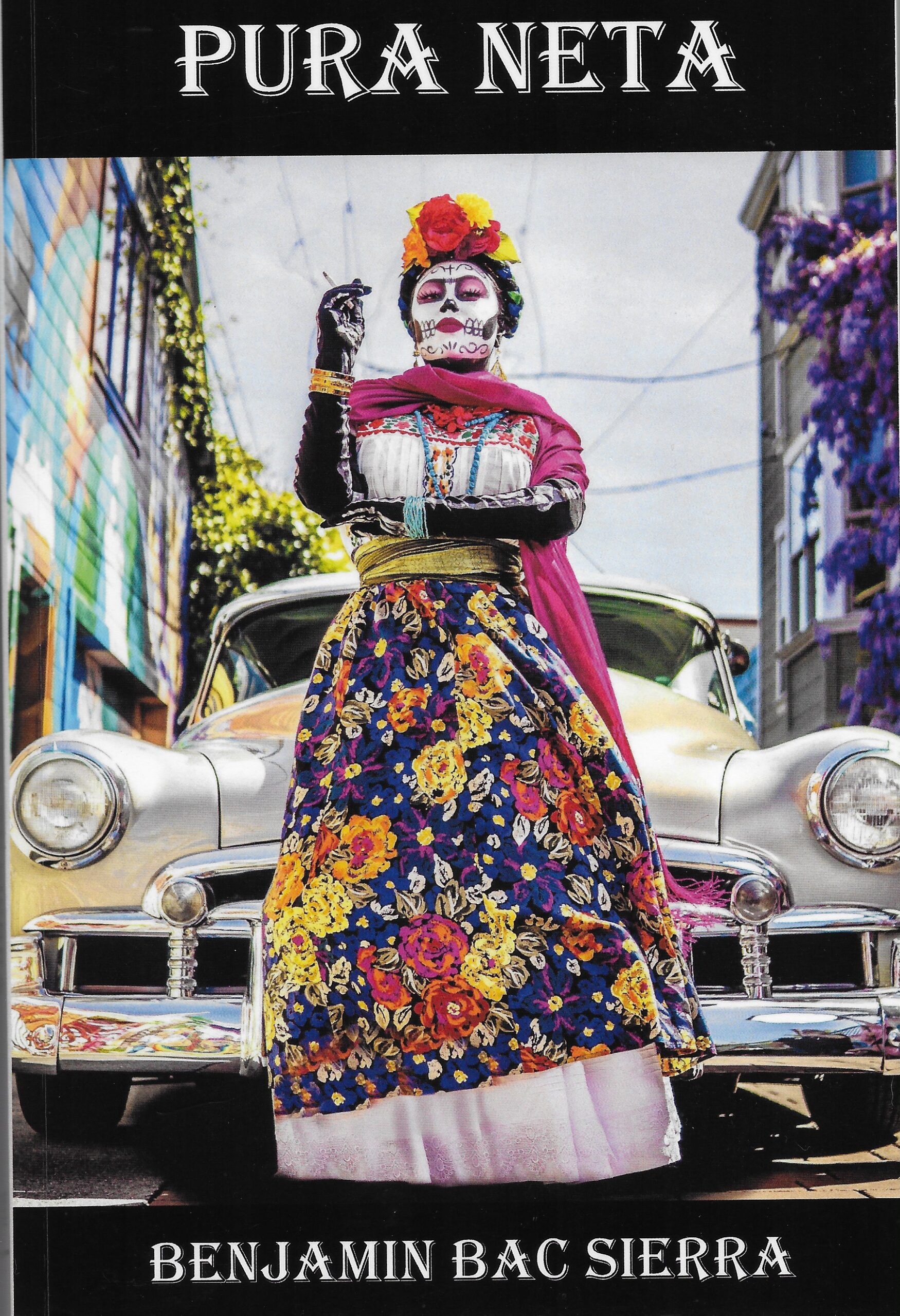 Benjamin Bac Sierra is a Mission District legend, a kid who grew up on the streets, went into the Marine Corps at 17 to escape a future that might have meant prison, got a master’s, a teaching certificate, and a law degree and now teaches English at City College.

He’s also an organizer, activist, poet and a writer, and his latest book, Pura Neta, tells the story of a young man who leaves the Mission to avoid the gang life, gets an education (including a law degree) and comes back to fight for the future of the community.

It is, of course, somewhat autobiographical. It’s also fiction. As Bac Sierra told me, “all of it is true, and none of it is true. Pura Neta in street Spanish means Pure Truth, and it’s a paradox.”

It’s half prose, half poetry, and all very, very real.

The main protagonist is Cartoon, who at 16 sits in the living room of Lobo, a dealer and OG, who tells him to get the hell out of town. “Get some education, young blood. I don’t want to see you unless you got something positive to give me.”

Cartoon leaves the Mission and wanders the country for 20 years, coming back to a barrio that is under assault not by drugs and crime but by gentrification, displacement, white people driving out Brown people. There’s a different war on the streets, and Cartoon tries to figure out how he fits in.

Here’s how Bac Sierra describes the Mission in the past decade:

A new evil emerged by the 2010s. Disruptive, destructive technology stormed into town. It did not want grace. It wanted its own self-justification. It did not want the patience of the natural world. It preached that gentrification makes everything better. Less crime, for example. But the desperate people who were kicked out did not simply vanish off the face of the Earth. They, with their oppression, simply moved to other lands, sisters called Pittsburgh, Antioch, Stockton, Modesto, the burgeoning rural slums. The new San Francisco 49ers with their big beards never really cared about saving anyone from crime and injustice. They cared about their gold, their own ways, they thought they knew better than the natives, because technology loved micro-Breweries more than barbecue joints, boutique stores selling $50 t-shirts better than 99 cent discount stores. Gray and black houses were better than the pretty colors of green, blue, yellow, and red. They were literally erasing the natural colors of the universe and pretending it was evolution, but it was not; it was just a poor imagination based on the unnatural lie of money and wealth, which they mistook for power. The new crowd believed in progress more than humanity, and this made it easier for the Natives to be likened to animals.

It’s a powerful book and also a great read – the poetry gives music to the narrative, and it tells a story of a place and a time that is a crucial part of San Francisco history.

It ends with the story of Alex Neta, who is of course Alex Nieto, who in the first person describes the police murder that became a galvanizing event for police accountability in the Mission.

I caught up with Bac Sierra last week for a Zoom interview. A slightly edited transcript follows.

48 HILLS This book is clearly in part an autobiography, so tell us a bit about your personal story.

BENJAMIN BAC SIERRA I was born in 1971, and initially raised in the old Army Street highrise housing projects. In 1977 my mother bought a house on the verge of being condemned in Bernal Heights for $30,000. It was one of the most diverse, blue-collar neighborhoods in San Francisco. There were stores owned by Filipinos, Samoans. There were African Americans, Latinos/Chicanos, whites, and a potpourri of many others; it was very diverse.

My father died when I was nine; he was a Guatemalan Mayan Indio, and he passed on to me his spirit.

I got kicked out of schools. By 11 years old, I was a kid on the streets, and by 13, I got my first stint in Juvenile Hall. I was lucky; I never got caught with drugs—because that would have been a total wrap for me in the mass incarceration era of the 1980s.

At 17, I was able to go into the Marine Corps. I had to convince them. They weren’t recruiting me. I had to lie to them, be undercover about the extent of my street past. I knew this was life or death, if I didn’t get out and into the Marines. That was a way out – the homies thought it was macho. It was a way to run away without running away.

By the time I finished my four-year term in the Corps, my older brother Jeff had gotten out of prison and had gone to City College, became an EMT and went through the fire academy. When I got out of the Marines and was suffering from PTSD, he’s the one who told me you have to go to school. I wound up graduating from UC Berkeley, then got a teaching credential certificate, and taught at Woodrow Wilson – a school I had been kicked out of a dozen years earlier! I finished a Master’s in creative writing, but my brother said we needed a lawyer. I wanted to be a writer, but he said ‘anyone can be a writer!’ So I went to law school at UC Hastings.

48H Talk about how the neighborhoods where you grew up in the 1970s have changed, and how that change informs the book.

BBS Back then, the Mission was on fire. The Mission was the craziest hippest street barrio in Northern California. It was life – and also death, which gave it even more life. On the streets you felt pressured to be in the moment. We became real close towards each other. There was a lot of Mission love because of the oppression. When you don’t got a lot, you cherish what you do have and what you imagine you have. You developed really powerful relationships and felt proud of your city.

Then from Reaganomics to technology, they are preaching that tech is our savior, and people in the news media are convinced that this is going to be good for you, the downtrodden. The news media, the teachers, the politicians are all like, “Just accept your doom with a happy face.” They made the same argument to the Ohlones, except that back then it wasn’t tech but it was Jesus: God is all powerful and will save you; now give us your land. Tech is now the new God; if you can’t pay the rent, it’s for the greater good of all that you get kicked out and that the gentry move in.

I mean, these houses in the Mission and Bernal Heights that were $30,000, are now $2 million. It’s the same wood, the same concrete. But that price tag is really a subtle way to say Whites Only.

We’re told that they know what’s best for us: you can leave, we will open cheese schools.

We built a beautiful colorful culture, a culture that is loud and proud. Even homeless people had a special bounce in the Mission. Now people with money say they want to live in this cool hip place, and they want to buy that culture, to pay money for it.

48H Your book ends with the story of Alex Nieto, who was killed by the cops on Bernal Hill. How does that part of the book fit into the changes you describe in the neighborhood?

BBS In 2012, Cartoon, who had been banished from the neighborhood 20 years earlier, comes back. He’s been on an odyssey of authentic education, both formal and informal, the stuff of life—living all over the United States. He comes back with a mission to help in any way he can. He recruits Little Santo, his dead mentor’s son, who is 20 years old and a compatriot of Alex Neta. They implement Amor Action, love for the neighborhood and the people. They see a lady with groceries – let’s give her a ride, Homes. Let’s promote literature and get books for the homies.

In nonfiction, Alex Nieto and I talked about developing a curriculum, a school for the community. At HOMEY (Homies of the Mission Empowering Youth), we did it – a ten-week curriculum, from What is Time to physical fitness to history and leadership. We talked about the movement. We would greet each other: What’s up with the movement, Homes? And we would smile.

What I want people to do is to enjoy the art of the book, the story and the poetry but also to find out about that case. I want the audience to read the book as art – but to move from the art to the pure truth, which is Pura Neta.

You can order a copy of Pura Neta (229 pages, paperback) from Pochino Press here.

Previous articleOakland’s As You Like It label rises from promise to musician Johnny Igaz
Next articlePuff your way through the holidays, and into 2021

The Housing Element numbers are really funky and don't make sense—and under Breed's Administration, there may be no other option.
Read more
Sponsored link