The Agenda, July 27-Aug. 2: Did progressives cause the housing crisis (um, No)….

JULY 26, 2015 – If you must read Gabriel Metcalf’s piece on how progressives caused the SF housing crisis (and I suppose you must, since it’s all over social media and since Metcalf is the director of SPUR and people will take this seriously), please do me a favor and also read this.

Oh, and take just ten minutes to watch this.

I was here in the 1980s and 1990s. I was watching, and writing about, and supporting the progressive movement all along. And I can tell you:

The progressives weren’t the Nimbys who opposed housing. In fact, I sat through plenty of Planning Commission and Board of Supervisors meetings when progressives practically begged for more housing. We argued – correctly, as it turns out – that you can’t build huge amounts of new office space and attract tens of thousands of new workers to the city without building any housing for them.

The progressives pushed through the Office-Housing Production Program, which required office developers to pay into a fund for affordable housing. I don’t recall SPUR ever supporting that.

The reason more housing wasn’t built has everything to do with the same reliance on the private sector that is screwing things up today.

In the 1980s, there was a huge influx of speculative investment capital in cities, driving by the deregulation of financial institutions and accelerated-depreciation tax laws, both key parts of the economic agenda of Ronald Reagan. S&Ls were paying unbelievably high interest rates to attract money, and the only way to make that work was to invest the money in projects that returned even higher rates.

And the highest return for that money in many cases was highrise office space in cities like San Francisco.

Not housing; the market for luxury condos that we are seeing now hadn’t developed yet. Housing simply didn’t give investors enough income to justify the cost. So no big developers built housing in San Francisco.

The housing that did get built was typically on a smaller scale – and in many cases, involved destroying something that existed already. The Residential Builders Association members were fond of buying vintage Victorian buildings – frankly, art that can never and will never be replaced – and demolishing them to make boxy multi-unit projects that turned a quick buck. Yes, a lot of people opposed that practice. But really, it was small-time stuff, a few hundred units here and there.

In the early 1990s, nobody was building anything. It was a deep recession. The S&L’s had crashed, costing the taxpayers $500 billion or so. The city didn’t really climb out until the mid-to-late1990s, when the first dot-com boom emerged.

Again: The money was in office buildings for the dot-coms. But we did see some big housing projects get built – largely with the support of progressives like Sup. Chris Daly, who cleared the way for thousands of new units in his Soma district. (He also demanded that developers pay into a community stabilization fund. There was so much money on the table that they put up tens of millions.)

Now, of course, there is in fact resistance to new housing – because the only kind of housing that the private market is building is very-high-end luxury condos and apartments. And there’s actual clear evidence that those condos are making the housing crisis worse. Yes: The city’s own studies show that the kind of housing the private market is now providing – because that’s where the highest return on investment is – leads to displacement and to higher prices.

So yeah: the progressives are against displacement and higher housing costs. But our policies didn’t create the problem. In fact, when many of us tried to limit office development, our goal was to stabilize the housing market – by preventing too much demand when the market was building no supply.

(That’s why some of us also opposed the Twitter tax break – we knew that it would bring thousands more high-paid workers to a city that had no place for them to live.)

Because it’s not supply and demand on the ground – it’s supply of investment capital and demand for returns that drives development in this city. 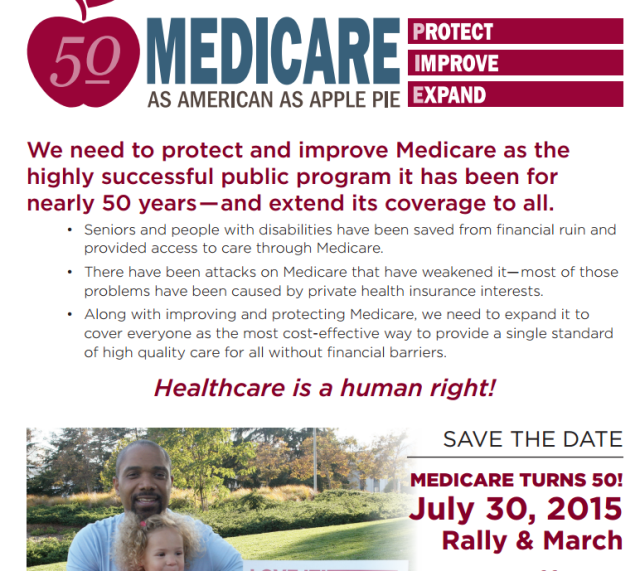 The Healthy California Campaign, which is fighting for “Medicare for All” – that is, and end to private health insurance and a guaranteed public program for everyone in California – holds a mass rally and march Thursday/30 to celebrate the 50th anniversary of Medicare and to push for a rapid expansion of one of the nation’s most effective public programs.

It starts at 11am at Frank Ogawa Plaza in Oakland. Info: 800-745-3090 or info@healthycaliforniacampaign.org.

As if the legal Ellis Act evictions weren’t enough of a problem, the city is also plagued by completely bogus “low-fault” evictions, where tenants are being told to leave for such crimes as leaving a bicycle in the hall or hanging their wash out to dry on a line.

Then there are the bogus evictions, where a landlord insists his daughter or brother wants to move into a unit – and then rents it out again six months later at a higher price.

Sup. Jane Kim’s legislation to protect tenants from these sorts of evictions gets its first hearing at the Land Use and Transportation Committee Monday/27 – and it’s the start of what could be a major battle between tenants and the real-estate industry (and could show which supervisors are on which side).

The bill does a few things, including forcing landlords to let tenants cure and correct minor violations before handing them eviction notices and preventing rent increases when people add roomates (or have a partner or spouse move in, or have kids), which can’t be that controversial. Or so you’d think – we shall see what Sup. Scott Wiener, who often sides with landlords, will say at the hearing.

The other provision would bar any rent increases after a unit has been cleared by owner-move-in or capital-improvement evictions. In other words, you get rid of a long-term tenant by pretending that a family member moved in – and when that person moves out, you can only charge the amount of rent you were charging before the eviction.

The idea is to take the economic incentive out of evicting long-term tenants. But the big landlord groups hate this kind of law, and I expect they’ll be fighting it bitterly.

The hearing starts at 1:30pm in the Board of Supes Chambers.

The Board of Supes is poised to put a measure on the fall ballot competing with the fake PG&E-friendly scam that would undermine public power.

The measure, by Sups. John Avalos, Scott Wiener, London Breed and Julie Christensen, would define clean energy in a way that is consistent with state law – and would force PG&E to admit that a significant amount of the power it sells in San Francisco comes from a nuclear power plant.

The Cultural Action Network, a group of artists and activists trying to protect diverse cultural spaces in the city, holds a “CAN Opener” event with food, drinks, and an overview of how to prevent the displacement of the city’s artists. Tuesday/28, 6pm, Mojo Theater, 2490 16th Street.

Previous articleThe Tom and Tim Show: The jail, the Gavster and pot …
Next articleLydia Lunch: “I’m still the enemy within”

Get a free Bay Guardian vintage logo tee at our Oct. 20 Fall Fling!

Family with many residential properties claims need for an owner move-in; community organizes to fight back.
News + Politics

The document needs major changes if it has any hope of promoting social equity.
Crime

The case of two bicycle hit-and-runs is a lot more complicated than Heather Knight's column suggests.