BIG WEEK I just returned from Berlin, where I finally attended Folsom Europe, the spin-off Continental version of our own Folsom Street Fair (happening this Sunday).  It ran a few blocks down the traditionally gay Schoeneberg district, brimmed with of tents you could buy actual alcohol at (hurray!), and overflowed with friendly if Germanically reserved faces.

It was also, to be honest, kind of boring. And there’s a surprising reason why.

While we here in the Bay Area have eliminated almost all of our sex clubs, backrooms, and bathhouses, they still thrive in Berlin. And I mean thrive. From the world’s most notorious gay sex club — Lab.Oratory, a Boschian labyrinth of writhing limbs that takes up the entire basement of an abandoned power plant, and where the bars sell personal-sized cans of Crisco — to the swankiest all-night bathhouse I’d even been to at 4am on a Tuesday, Der Boiler (not to mention the dozens of backrooms in bars all over the city, some of them available for straight couples), there was a whole lotta somethin’ somethin’ going on. After a while, it all felt kind of civically dutiful. 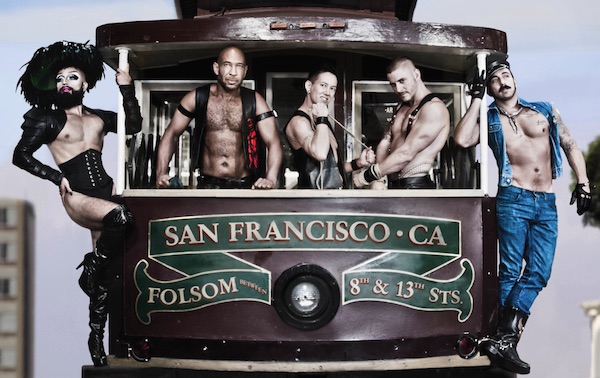 Why then bother with having sex in public — or even getting a little kinky? In fact, the city government specifically decreed that because there was so much sex allowed in bars and clubs, that there could definitely be none outdoors. That put a damper on everything: no kissing, only one whipping, hardly any women (extra boring!), even the fisting aficionado tents advertising upcoming events like Fistival 2016 and casual meetup Fist and Chips hardly had any edge when it came to presentation. Nudity was gasped at, affection deflected. Instead, Folsom Europe was like a large costume party, with manly men strutting about in their favorite outfits — Prussian generals, SWAT teams, and Motocross racers were favorite themes — often in matching packs of three or four.

Who knew all our sexual repression would make our own Folsom Street Fair such a Garden of Earthly and Sometimes Unfortunate Delights? I look forward to seeing a bunch of stuff that makes me cringe and curious simultaneously, in all combinations, genders, expressions, and senses. Viva SF’s weirdly Puritanical sex scene! 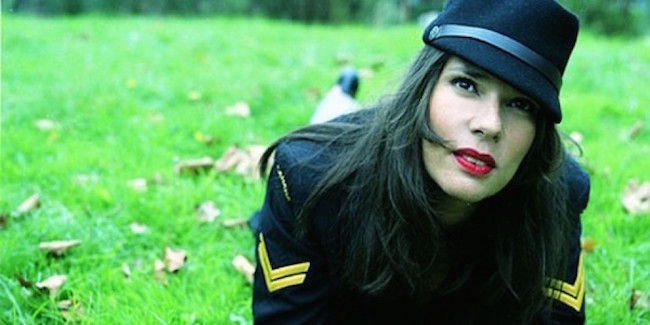 >>> LAETITIA SADIER The beloved Stereolab singer made a name for herself with intellectual lyrics rife with sly humor and charming ennui — 2012 solo album Silencio is an overlooked masterpiece — and now she’s hitting Brick and Mortar with her husky, seductive, post-Marxist alto. Wed/23, 9pm, $12-$15. Brick and Mortar, SF. Tickets and more info here.

>>> D. WATKINS The author of The Beast Side: Living and Dying While Black in America will be onhand to read from this nonfiction work, the first new local publishing house Hot Books. Wed/23, 7:30pm, free. Green Apple Books on the Park, SF. More info here. 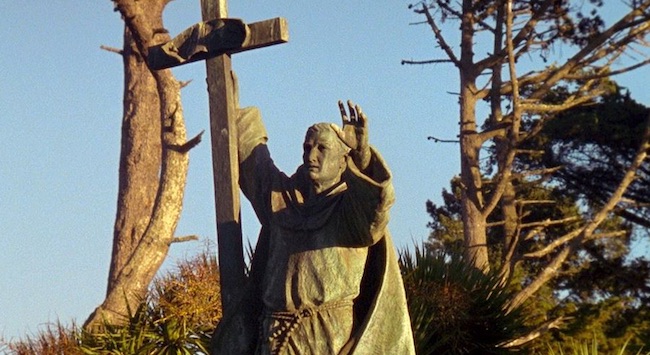 >>> THE ROYAL ROAD Local filmmaker Jenni Olson’s acclaimed “cinematic essay in defense of remembering” uses Junipero Serra’s Spanish colonization of California — a very hot topic right now in light of future canonization — as a launching point for more intimate explorations. This is the SF theatrical premiere of this gorgeous, truly innovative work; Olson will be there for a Q&A. Thu/24, 7pm, $10. Roxie Cinema, SF. Tickets and more info here.

>>> COASTAL NIGHTLIFE One of the coolest weekly parties in the city, Nightlife at the Cal Academy of Sciences, gives us this timely theme — as in, just in time for Sea Otter Awareness Week! I am aware that they are so cute! But you can also meet the Academy’s ace diving team, try on some cool surf gear, check out an exhibit of Nudibranchs (cool) and groove to DJ Tom LG down in the coral reef. Thu/24, 6pm-10pm, $12. Cal Academy of Sciences, SF. Ticket and more info here.

>>> TIARA SENSATION PAGEANT 2015 A crowd-pleaser for all ages and, er, tastes, this annual tradition pits the city’s biggest and artiest drag queens against one another — at the de Young Museum, no less — for the biggest tiara in town. Tons of wonderful numbers and hair-raising sights. Fri/25, 6:30pm, free. de Young Museum, SF. More info here.

>>> MAVIS STAPLES AND JOAN OSBORNE Soul and gospel icon and Rock and Roll Hall of Famer Staples teams up with young upstart Osborne (I mean, she only has seven Grammy noms) for a night of belting it out with flair. Great pairing. Fri/25, 7pm, $39.50. the Fillmore, SF. Tickets and more info here.

>>> MITAGSTISCH A “collaborative show of six artists associated with the Kunstakademie Düsseldorf. It is also a word that brings to mind, the time of the day where one would meet to have conversations and eat a delicious lunch.” Looks intriguing, delicious. Fri/25, 5pm-9pm, free. Ladybug House, SF. More info here. 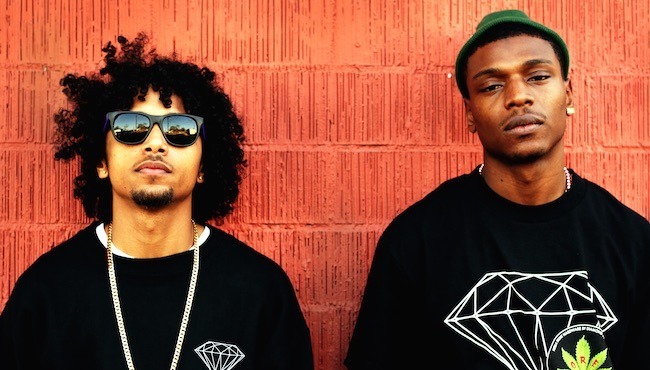 >>> SUPERHERO STREET FEST Throw on that magic bodysuit and cape (don’t forget the kicky boots and mask) and fly, Robin, fly to this sixth annual funniest. Lots of dance and entertainment stages — not to mention a few feats of strength (like raising a beer glass). Sat/26, 1pm-11pm, $15. Cesar Chavez and Indiana Streets, SF. Tickets and more info here.

>>> FOLSOM STREET FAIR Yes, it’s the world’s biggest fetish fair with up to 300,000 attendees — but it’s so much more: community meeting, point of civic pride, even lately a major music festival, and this year is no different. While you test out the rim chairs and St. Andrew’s Crosses, delight to the sounds of world-class DJs like Harvey, Mike Servito, Vin Sol, Mozhgan, and Bill Todd and great New Wave act Missing Persons (!!). Sun/27, 11am-6pm, donation requested. Folsom between 8th and 13th Streets, SF. More info here.

>>> OKTOBERFEST BY THE BAY Oom-pah-pah, baby! Pier 48 becomes ground zero for stein-hoisters all weekend long at this bereft (also food, and dancing, and the 21-piece Chico Bavarian Band.) the good news? You can wear your lederhosen to this and Folsom Street Fair! Hops hoppin’. Sun/27 — also Fri/25 and Sat/26 — various times and prices. pier 48, SF. Tickets and more info here. 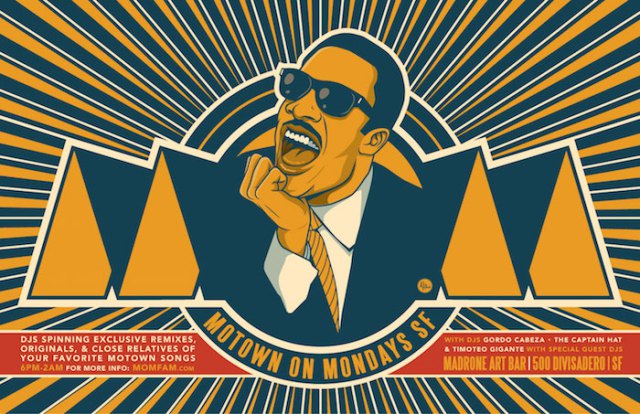 >>> MOTOWN ON MONDAYS One of the absolute best weekly parties in the city — very chill and very dance-y. (And so successful it’s now spawned Motown on Mondays nights nationwide.) Get down to Motown sounds from DJs Gordo Cabeza, Timoteo Gigante, The Captain, and weekly guests. Mon/28 and every Monday, 6pm-2am, $3 after 9pm. Madrone Art Bar, SF. More info here. 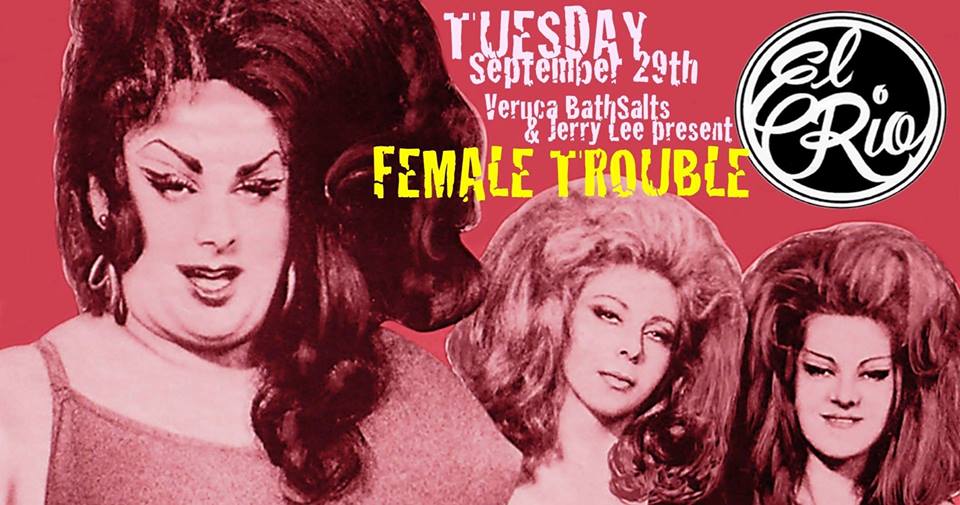