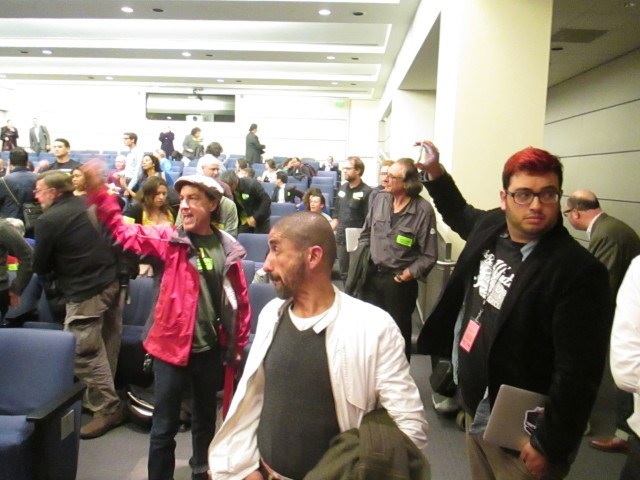 A proposal that would completely remake the San Francisco Democratic Party is quietly floating around and could go before the party’s Central Committee next week.

The plan, by DCCC member Alix Rosenthal, would give the mayor and every member of the Board of Supervisors automatic seats on what is now a 32-member panel.

That, Rosenthal told me, would leave more room for activists who want to play a role in the party.

There are currently four supervisors on the panel, which sets policy for the local party and more importantly does party endorsements in local races. Sups. Eric Mar, Scott Wiener, David Campos and Malia Cohen all hold seats, and some were on the DCCC long before they were elected supervisor.

All four are running for re-election in June, and Sup. Norman Yee has filed, too. It’s likely that Sups. Aaron Peskin and Jane Kim will also run. Board President London Breed is also considering the race.

Since high-profile elected officials almost always win seats on the DCCC, where name recognition is a critical factor, Rosenthal says the possibility that seven supes could be on the panel leaves less room for people who hold no elective office and just want to help build the party.

“This is about good government,” she told me.

Right now, today, the move wouldn’t shift the balance of power on the committee – there are six progressive votes on the board, and five moderates; add in the mayor, and it’s 6-6.

But the makeup of the DCCC is about to change: The entire membership (save for the existing ex-officio members, who include statewide and federal elected officials) will face the voters June 7, and both the progressives and the pro-mayor, pro-real-estate interests are running aggressive campaigns.

The current panel is dominated by members who elected Mary Jung, a lobbyist for the Board of Realtors, as chair. Under Jung’s majority, the committee has pretty much sided with the city’s tech oligarchy and the police union. It’s been an embarrassment.

And part of the plan by progressives to take the party back involves Campos, Mar, Peskin, Yee, and Kim winning seats.

The outcome of the June election, and the future shape of the party, matters: In November, control of the Board of Supes will be up for grabs, and in closely contested races, the Democratic Party endorsement makes a difference.

Here’s what makes this so tricky: The filing deadline for DCCC is March 11. The meeting at which this dramatic change in the bylaws would be considered is March 16.

So people who are thinking about running, and people who are filing to run, may be facing very different rules five days after they take out the papers.

That’s one reason the Latino Democratic Club is opposing the change:

The deadline to run for the DCCC is March 11th. If this proposal where to be voted on at the subsequent DCCC meeting, it will dramatically alter the fairness of the June 7th election. Under the new rules several current candidates would be disqualified and a number of qualified candidates that would have run will be shut out of process.

And while Rosenthal talks about the need to bring activists into the fold, there are already eight elected officials who are automatically on the panel – Sen. Dianne Feinstein, Rep. Nancy Pelosi, Rep. Jackie Speier, Attorney General Kamala Harris, Board of Equalization member Fiona Ma, State Sen. Mark Leno, and Assemblymembers David Chiu and Phil Ting.

Adding 12 more would mean 20 of the 42 members – almost half – would be elected officials, not grassroots party activists. It would have the feel of the “superdelegates” who get to vote for the presidential nominee no matter what the outcome of the primaries.

The Richmond Democratic Club, which also opposes the measure, warned that it would “potentially give more power to the elites than the grassroots.”

And, of course, members of the Community College Board and School Board and other elected officials would be welcome to run and serve on the DCCC.

Let’s play this out: If the Rosenthal measure passes, and Sups. Wiener, Yee, Cohen, Kim, Campos and Mar are elected to the DCCC, where some have served a long time, their seats will be vacated, and the chair will appoint replacements. Rosenthal wants those replacements to be the highest vote-getters who didn’t make the cut in the June election.

But in January, when Campos and Mar are termed out as supes, they will also be kicked off the DCCC, despite the fact that the voters chose them for a four-year term on the panel.

And the timing is a bit screwy: Everyone has been putting together slates in the past few weeks, and if this rule had been in place six months ago, those slates would be very different. Instead, the DCCC will vote on the bylaws change when it’s too late to decide who’s going to run.

Jon Golinger, who is working on the progressive reform slate, told me that he agrees there has to be a discussion about the DCCC bylaws. “If we are going to say that supervisors can’t run, what about people who are running for supervisor?” he asked. “Should we have campaign contributions limits?

But this measure, he said, comes at a bad time: “There would be a lot more people running if we knew about this earlier,” he said.

The Harvey Milk Club also opposes the change. “It puts more power in the hands of the few,” Club president Peter Gallota told me. “It actually reduces the power of party activists.”

The measure would require a two-thirds vote, and it comes up at the meeting Wed/16 at the state building, 350 McAllister.