The challengers did the best they could, but a weak format allowed Lee to duck any criticism of his record 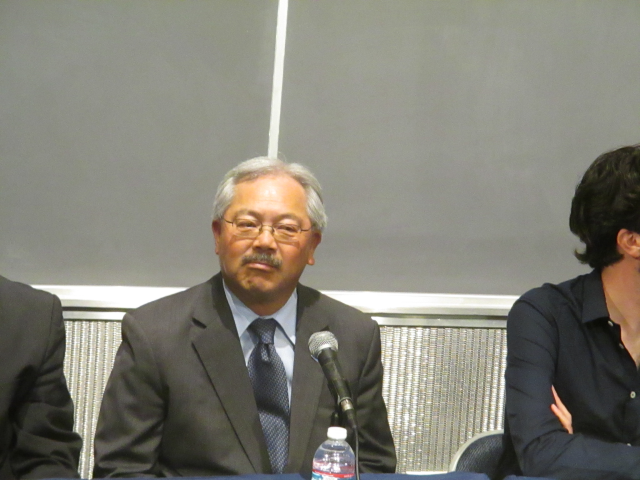 OCTOBER 9, 2015 – Mayor Ed Lee showed up for the one debate with the five other people who have filed to run for his office, and for the most part – despite a hostile audience, some remarkable statements, and a hasty exit – he emerged unscathed, in part because the moderator never raised any questions about the area in which he is most vulnerable: The human costs of the tech-driven boom that he has encouraged and still supports.

The League of Women Voters sponsored the debate at the Genentech Hall on the UCSF Mission Bay Campus. The rules were simple – all the questions came in writing from the audience, and the moderator, Maxine Anderson, chose from them.

Either nobody asked about the housing crisis or those questions never made the cut.

Amy Farah Weiss, who has been among the most aggressive of the underfunded candidates, repeatedly took on the mayor and criticized his policies and offered some alternatives. Stuart Schuffman, better known as Broke-Ass Stuart, who announced his campaign as a journalistic experiment, was at times insightful and often amusing, by far the most relaxed of anyone on the panel.

Francisco Herrera, a longtime Mission District activist, was passionate and in the final moments made the best case for his campaign.

The other two, Reed Martin and Kent Graham, mostly went along with the progressive positions of Lee’s challengers. Before last night, I had never heard of either of them and had no idea they were running for mayor.

Lee looked uncomfortable from the moment he arrived. He seemed to see the debate as an unfortunate duty – he didn’t want to snub the League – but he clearly didn’t want to be there. His answers were flat and appeared pre-scripted. He never smiled until the very end. He arrived to boos and left so quickly that even veteran reporters like me couldn’t catch him for an instant.

Overall, perhaps because of the format, the debate was short on policy. The candidates each had one minute to respond to each question.

The first question was about CleanPowerSF, and everyone said that was a fine idea. Lee even confirmed that he was in favor (modestly) of the public-power program. Then came a question about transportation infrastructure. Herrera suggested that the Google buses ought to meet their workers on the outskirts of town. The mayor rambled on about how the city needs more subways but also “we do need infrastructure dollars,” offering no idea where that money might come from. (He clearly isn’t going to ask developers to pay for it.)

Schuffman, after noting that he met his first girlfriend on Muni, told us that the city is too congested, in part because of all the cars the ride-sharing companies have dumped onto the streets, and suggested that a higher charge for the Google buses might help pay for public transit.

Weiss called for an environmental impact report on the tech buses and on Uber and Lyft and said the the Lee administration “is capitulating to big corporations.”

And then on to the homeless crisis.

Lee said that “there is a homeless challenge” in San Francisco, an understatement if there ever were one, and said his Navigation Center project was part of the solution. Martin made some odd statement about helicopters taking homeless people out of Golden Gate Park, which is a new one to me.

Schuffman made a nice point: “There are about 10,000 homeless people in San Francisco, and about 10,000 Airbnb rentals. I’m just saying.”

And he said that when “this administration says homeless people just have to get out of here, I find it appalling.”

Next up: The Sanctuary City policy. Everyone except Lee was totally on board. Lee hedged a bit, as he has always done.

There was discussion of the dramatic decline in the African American population in San Francisco. Schuffman suggested a right of return for people displaced from Hunters Point Bayview. Herrera said we need to start by supporting Prop. I, the Mission Moratorium, and expanding it citywide.

Lee talked about a “multi-pronged approach” that didn’t amount to much of a policy at all.

Anderson chose a question about the number of people in the county jail who are behind bars only because they can’t make bail. That’s a fascinating issue, but has very little to do with the mayor’s race – it’s a matter for the sheriff and the courts. Herrera praised Sheriff Ross Mirkarimi’s efforts; Lee pretended the sheriff didn’t exist. In fact, he insisted that part of the problem was the need for education and job training in the county jail – something Mirkarimi has made a priority and has won awards for.

There was a question about human trafficking at the Super Bowl (everyone’s against it) and the dirt on the streets (Schuffman said that “we can solve our poop problem” with more toilets and Weiss talked about eco-friendly “pee planters.”)

Eventually, Anderson took a question about making tech companies pay their taxes. Everyone but the mayor argued that the tech sector wasn’t paying its share. Lee went on the way he usually does – he said that the tax breaks for tech companies in mid-Market had helped create a strong economy, which has made it possible to have healthy city budgets.

Nobody had the chance to address the city’s most pressing question: What if the costs of that economy are greater than its benefits? What if most San Franciscans are worse off now than they were five years ago? What if the stunning housing costs that have been the result of the mayor’s “strong economy” have driven tens of thousands of longtime residents out of their homes? Was is worth it?

That question wasn’t asked. So it was never answered.

Weiss summed up by talking about the need for local leaders to use their power for love and justice. She also said that she has the leadership abilities – “I had a meeting with Google, and I can talk to Scott Wiener.” Schuffman said he “found his heart in San Francisco, and that’s what we’re losing. … we need to get corporate money out of politics.”

Lee told us once again that he was proud of creating a lot of jobs. But Herrera put it in context:

“These are 40,000 jobs for people who didn’t live here, while 10,000 people were kicked out of the Mission. This planning is not for us. Our communities have the wisdom to build a city where we can live.”

I’m not usually a fan of the debate format that features a panel of reporters. Audience questions are good and democratic. But in this case, I can’t imagine a professional journalist of any political persuasion allowing the mayor to get away with essentially answering no tough questions.

Lee’s challengers did their best. But the debate never put the incumbent to the test. What a shame.

Progressive initiatives, opposed by the mayor, seem to be working.
Read more
Economy

The old work model is over, and downtown and the local economy is going to suffer—unless we get creative about the future.
Read more
The Agenda

Plus: How is the city going to meet its state-mandate affordable housing goals? That's The Agenda for May 16-22
Read more
Sponsored link