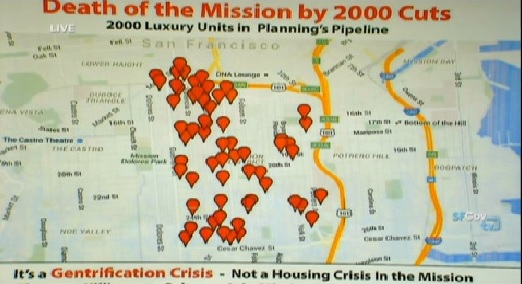 A remarkable, stunning vote happened at the Board of Supes Tuesday: By a 9-0 margin, the members agreed that a big market-rate housing project in the Mission needs a full environmental review.

That spells the end of the Eastern Neighborhoods Plan, puts every other developer in the area on notice, and sends a signal to the Planning Department that displacement and gentrification have to be a central concern for all project approvals.

And it happened in part because a representative of SFBARF made comments in favor of the project that the supes found so totally offensive that one of them wanted anything to do with it.

The project, at 1515 South Van Ness just off 26th, is on the edge of the Calle 24 Latino Cultural District. The appellants say that the project needs a full environmental impact report, because the general EIR on the Eastern Neighborhoods is way, way out of date.

This isn’t the first project that community activists have appealed on that basis. The Eastern Neighborhoods Plan dates back to 2008. By law, the EIR on the overall plan was supposed to take into account all possible development allowed under the new zoning rules, meaning no news EIRs would be needed on projects that met those rules.

But that was a long time ago: In 2008, there were no Google buses, there was no Uber and Lyft, the Tech Boom hadn’t decimated San Francisco, and the Mission wasn’t under a full-scale attack as it is today.

Oh, and by the way: There was no Calle 24 Latino Cultural District.

Scott Weaver, attorney for the appellants, noted that

Potential impacts [to Calle24] due to gentrification and displacement to businesses, residents, and nonprofits within the LCD, including impacts to cultural and historic resources, health and safety and increased traffic due to reverse commutes and shuttle buses have not been considered.

Nor have the cumulative impacts of a series of proposed market-rate housing developments that would greatly exceed anything that the planners imagined or analyzed eight years ago.

Several supervisors, including Aaron Peskin and Malia Cohen, have questioned whether the 2008 EIR makes any sense any more. But on every appeal so far, the board has sided with the Planning Department and the developers, saying that the legal grounds for demanding a full EIR haven’t been met.

This one was very different.

For one thing, the board appears to have reached a breaking point when it comes to the Eastern Neighborhoods. Too much is happening, too fast, and the community is pretty united in demanding that the city slow down a bit and analyze whether the next wave of market-rate housing will cause more harm than good.

But the supporters of the project were also pretty horrible.

Sonja Trauss, who represents the SF Bay Area Renters Federation, also known as SFBARF, made a pretty stunning statement, which you can watch here at about 3:14. She followed a speaker who said that he was a wealthy person who moved to the Mission “because it’s a great neighborhood” and had “muscled” other tenants out of the apartment he wanted because he had more money.

Trauss then went on to compare the Latino community that is concerned about displacement to Donald Trump’s nativists.

She was followed by the owner of McMillan Electric, who sold the building to the developer, Lennar Corp., who complained about homeless people and said that Calle 24 wasn’t around in the past to deal with “the gangs and the drugs.”

Actually, many of the folks now involved with Calle 24 have a long history of working to prevent gang violence.

But between those speakers, the message was pretty clear: People who wanted the project had a dim view of a community that has been in the Mission for more than half a century and that is now under a tremendous threat.

Sup. David Campos, who represents the district, has always been careful with these EIR appeals. An experienced lawyer, he has often had to say that the appeal didn’t have enough facts to justify it.

This time, he was out of patience.

He said that he had arrived at the meeting planning to vote against the appeal, but “public comment does make a difference.” After listening to the arguments, he said, he was convinced that there were grounds to demand a full EIR.

But he also noted that “I want to thank the representative from BARF for helping to change my mind … and the man who talked about homeless Latinos and gang violence, thank you for shedding light on the issue.

“I want no part in the age of Donald Trump of the kind of hateful, ignorant, and divisive rhetoric represented by these individuals,” he said. “If there is ever a time to stand by what it’s right, that is now. I want to send a message to other projects – let that be a lesson to you.”

Added Sup. John Avalos: “I found the comments [in favor of the project] to be so offensive … to think we have a project defended with such arrogance. It’s beyond the pale.”

Then Sup. Eric Mar talked about how much he agreed with Campos and Avalos, and Cohen said that she wanted the Planning Department to take seriously the cumulative impacts of all the development in the area.

And when the vote was called, it was 9-0 against the project.

So this is a new era, both in SF politics and in planning.

The project isn’t dead – it just needs a full environmental analysis, which has to look at the impacts of Calle 24. That could take a year or more. And all of the big projects that are in the pipeline for the Mission could face the same fate – unless Planning gets its act together and completely overhauls the Eastern Neighborhoods Plan and does a new EIR.

Which would take way more than a year.

And in the meantime, the folks who argued for a moratorium on market-rate housing in the Mission just got a boost – because if this decision stands up, the message to Planning will be: Slow down.

The politics were also clear: Nobody in San Francisco, even the conservatives on the Board of Supes, wants to be associated with Trumpist rhetoric or policies. Since there are quite a few decisions that the city has made that follow the GOP economic model of market-based economics, and since the next Board of Supes will include more corporate Democrats than progressive Democrats, it will be a fascinating period.