PARTY RADAR Young people often ask me, an Ancient One, if living under Trump is what it felt like living under Bush. That’s a tricky question, partly because 100 days versus eight whole frickin’ seemingly endless years is not exactly comparable at this point. But of course the angst and feeling of complete powerlessness are back, like metaphorical PTSD, made more raw from constant social media and news exposure. (My real answer is that so far, at least culturally, it seems more like living under Reagan at the height of the Moral Majority. In my hindsight, Bush II seems a slow-burn of heartbreaking stupidity and unworldliness, whereas 1983-ish seems a flashpoint of dismay.) But thanks for making me remember all that! Ha.

As for nightlife, well, so far nightlife has been more a political pressure valve than a form of resistance. This was true throughout a lot of the Bush years: When we weren’t throwing awkward “Fuck Bush!” parties, we were using the dance floor as an escape pod. (For the record, SF had parties protesting Obama deportation and drone policies too.) That is perfectly valid and necessary, and yes, I’ve noticed our dance floors have become a bit wilder. The outpouring of nightlife action in the wake of Ghost Ship was inspired, and lovely fundraising parties for refugees and others affected by the current regime have popped up here and there. But what form, if any, will direct nightlife resistance take?

One possible energizing pathway is provided this Saturday with the 100 Days No Ban Dance Party (Sat/29, 10pm-2am, $10. Gray Area, SF. Tickets here.) The idea is pretty ingenious: gather DJs and musicians from the seven countries listed under Trump’s original, failed Muslim ban and have them lead a dance party on Trump’s 100th day in office. The resistance here is cultural, showing how much is at risk from such a foolish policy. It’s also the culmination of 100 Days Action, which has hosted everything from poetry readings to crafting actions to protest the Administration.

The 100 No Ban Dance Party also showcases some incredible talent, including avant-garde composer-performer Surabhi Saraf, Iraqi DJ Ahmed, hip-hop-reggae-Arabian-music DJ Hagage Masaed, live loop-builders Aria Rostami and Daniel Blomquist, and local scene favorite Sepehr, playing some smart house and techno. You can read more about the performers here, but better yet show up — as we all must, for the long haul ahead, but jubilant in community. 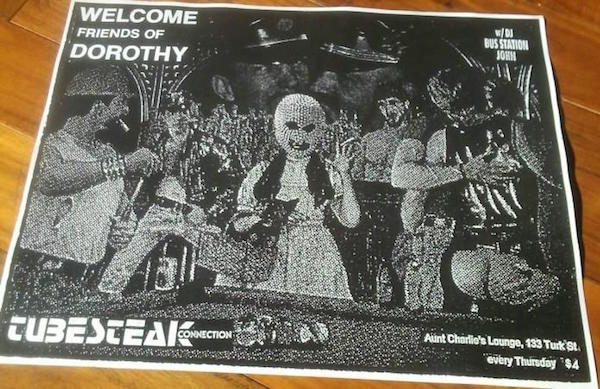 BIG FREEDIA The queen of New Orleans bounce – and everyone’s heart — is back for another rambunctious booty-unctious time. Love her! Thu/27 9pm, $35. Mezzanine, SF. Tickets and more info here.

BROUHAHA Alison Swing and Masha from LA’s super-groovy Dig Deeper party pop in for this awesome (and affordable!) monthly in Lower Haight (the best neighborhood ever, of course). Fri/28, 9pm-2am, $5. UndergroundSF. Tickets and more info here.

CALIFORNIA MYSTICS WITH ZOE KEATING The Mercury Soul parties mix classic and cutting-edge contemporary music (Steve Reich’s incredible ‘Drumming’ will be performed live, and then the audience will jump in to help with Terry Riley’s “In C”) with an underground nightlife feel. This time around features Zoe Keating, who digitally loops her cello into magnificent sonic architecture. Fri/28, 9pm-2am, $25. DNA Lounge, SF. Tickets and more info here.

SWEATER FUNK WITH THE PENDLETONS One of the Bay’s best old school soul parties  brings in this vibe-y live funk combo (including E Da Boss) for a night of slick glamor on the dance floor. Sat/29, 10pm, $8-$10. Elbo Room, SF. Tickets and more info here.

NoFOMO The too-cute Portland party takes over the Stud with patented weirdo shenanigans and awesome tunes you most likely will not have heard. With Sappho, Stormy Roxx, David Sylvester, and Jordee. Sat/29, 10pm-4am, $10. The Stud, SF. More info here.

FAREWELL, PUTANESCA! One of my favorite people to wrap my head around, classic drag queen Putanesca is leaving for greener pastures — literally, as she embarks with jazz chanteuse Veronica Klaus to launch an art, music, and cafe space in Sharon Springs, New York. The weekly Mother drag party oasis with give her a saucy farewell, I’m sure! Sat/29, 10pm-3am, $10-$20. Oasis, SF. Tickets and more info here.

DISCO DADDY How much DJ Bus Station John can San Francisco take? Why not ALL of him? As well as Thursday’s Tubesteak Connection anniversary, he’ll be transforming the Eagle on Sunday into a good ol’ dance floor of yore, as his Disco daddy party salutes the “soul men of disco.” Teddy, Barry, Luther … Y’all better take a listen! Sun/30, 7pm-2am, $5. The Eagle, SF. More info here.

At SF Symphony, the singer performs a collection of historical words set to new music by Black women composers