... plus Due Process for All and the move toward a Public Advocate 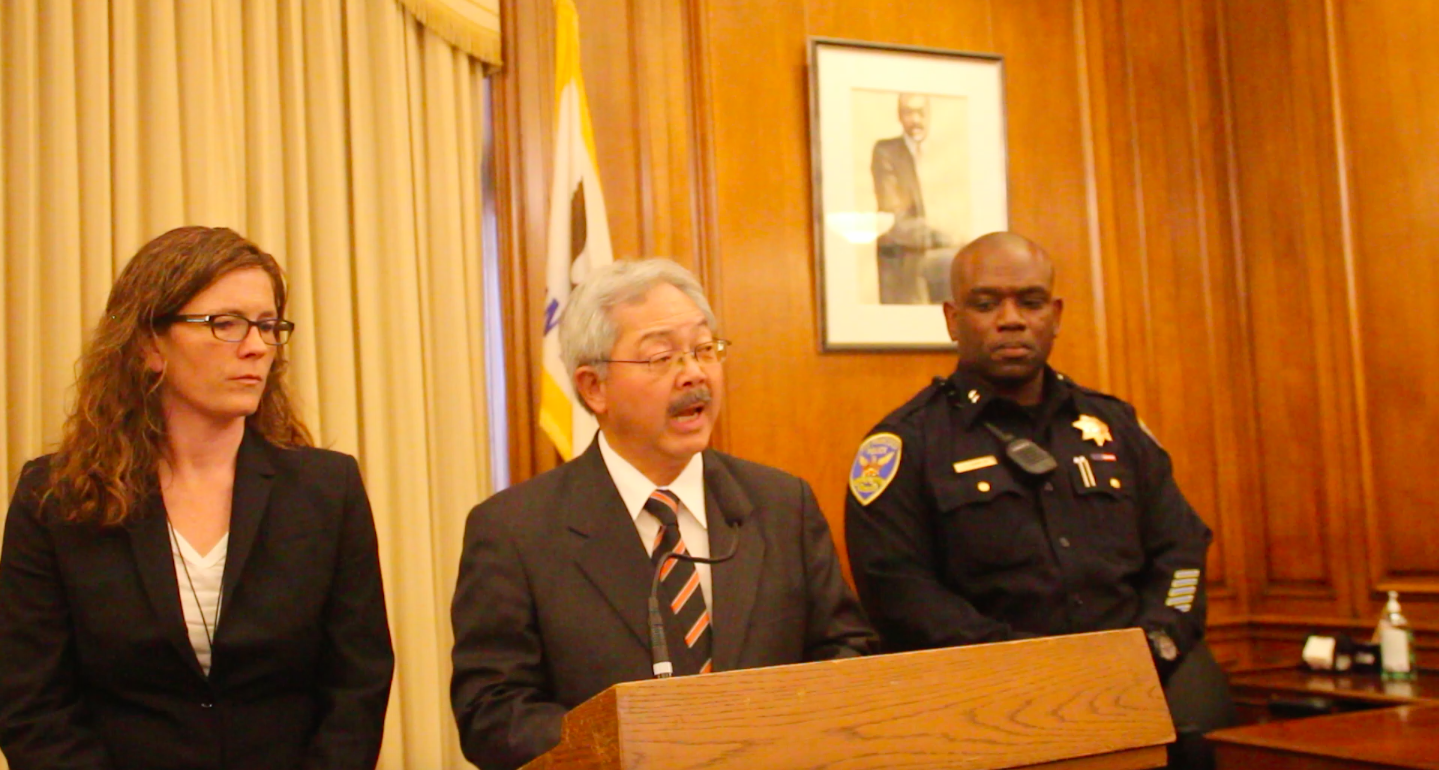 By mid-afternoon, a little after 3pm Friday, reporters were starting to gather out in front of the Mayor’s office. We’d gotten the word, thanks to a tweet from veteran journalist Mike Sugerman, that the mayor was meeting with Chief Greg Suhr – and that something was about to happen.

So we all called our City Hall sources — outside of the Mayor’s Office, which so typically was being opaque — and got word that maybe the mayor was supposed to be making a statement in the next hour or so.

So the cameras showed up, and the print and digital media showed up … and we waited. Nobody from the Mayor’s Office came out to tell us anything. The chief slipped out a side door; only one TV camera person saw him, and while we all ran downstairs to try to get a statement, he was gone.

Back to Room 200. At this point, everyone knew what was going on; the mayor had met with the chief, and either he was going to say that he still had confidence in Suhr, or he was going to day that Suhr was gone. “There are only two statements he can make at this point,” one insider told us.

So the reporters started texting the mayor’s press people, Christine Falvey and Francis Tsang, to ask when we could expect to see Ed Lee appear and make his statement.

Falvey is always very, very slow to respond to me. But we’re talking the more mainstream media here, KPIX, and the Examiner, and like that. And the reporters showed me the texts they got back, which read like this:

In other words, with more than a dozen news media outside the door, the mayor’s press staff pretended there was nothing happening, nothing at all, nothing to see here.

And of course, not long after that, the office door opened and we were led in while Mayor Ed Lee issued a short, pre-written statement, and took no questions.

The main reason that the mayor’s popularity is at such radically low levels right now is that he’s allowed the housing crisis to get vastly worse, that he’s turned the city over to the tech billionaires, that he’s sending the police out to confiscate tents from homeless people, and that most San Franciscans feel the city is slipping away from us.

But this kind of shit from the press office doesn’t help.

I don’t always agree with the way my colleagues in the City Hall press corps cover things, but there are many of us with years of experience, and collectively we are not idiots. And I can say this: When you tell the press that there’s nothing happening and no statement, and an hour later you release a statement that we all knew was coming and that makes headlines all over the country, you aren’t doing much for your already strained credibility.

How about one of the high-paid people who do media for the mayor comes out of the closed door and says: The mayor is meeting with the chief, and when he’s done he will have a statement. Projected time is 5pm (the TV news folks need to know that).

How hard is that?

It’s hard to be a press secretary to a politician, especially when that person isn’t popular. But you can be a professional (which means being open, and not defensive, and answering questions even from pesky reporters who annoy you, in a timely fashion) – and right now, it looks like amateur hour over in Room 200.

Sup. John Avalos will try again Tuesday/24 to get the city leadership to at least accept some version of a law that protects due process for everyone, including people who don’t have documentation. Avalos asked for a continuation last week, saying that he was trying to find common ground with Sheriff Vicky Hennessy, who wants to retain the right to call immigration authorities and turn in people who are in her custody.

The mayor is on the side of the sheriff. Advocates will again be out in force. And we will see if there are six supes who will side with Avalos.

Sup. David Campos will be introducing Tuesday the much-discussed plan to create and Office of the Public Advocate at City Hall. He will have a number of co-sponsors, although at this point we don’t know how many. The mayor, I am told on good authority, is working hard against this idea, telling the supes who might be swing votes that adding an office to support the public might make it look as if he – Mayor Ed Lee – wasn’t doing his job.

Which I think about 70 percent of the voters, according to recent polls, would say is true.

This will be a huge issue over the next few weeks, a chance to change the City Charter and take out of the Mayor’s Office some things that clearly need more independence (the Office of Citizen Complaints, which investigates police misconduct; the Office of Labor Standards Enforcement; maybe, I could argue, the Sunshine Ordinance Task Force, which is currently under the Board of Supes.)

Tom Ammiano, the former Assembly member, explains in the Sunday Examiner why this makes sense.

But it will, indeed, be in part of referendum on the mayor, who would do better by acknowledging the problems and getting behind reform instead of fighting what could be a populist battle.

The Democratic County Central Committee, which has become Ground Zero in the battle for the future of the city, will consider a measure Wednesday/25 that would endorse the efforts of Sup. David Campos to better regulate Airbnb. The resolution has the support of Senator Dianne Feinstein, who is sick Airbnb’s attack on the neighborhoods, along with state Sen. Mark Leno.

This will be a key test for the candidates who are running for re-election, or running for higher office. Airbnb has spent a ton of money on local politics of late, including big donations for people running for DCCC. We will see who can stand up to that level of corporate lobbying.

A pair of animals settles in, offering lessons on our contemporary relationship to nature
Opinion

A pair of animals settles in, offering lessons on our contemporary relationship to nature
Read more
Protest

A bloated police budget has not made the streets any safer; it's time for real alternatives.
Read more