Retro delights on tap, including Dr. Ruth and 8-track tapes, plus French hustlers, a Merce Cunningham tribute, and more in cinemas this week.

By Dennis Harvey
April 30, 2019
Share on FacebookShare on TwitterShare on LinkedInShare on RedditShare on Email

SCREEN GRABS For those not glued all weekend to the SF Silent Film Festival (see our preview here), there’s actually another film festival to consider: DocLands, the California Film Institute’s annual showcase for nonfiction cinema. Its subjects ranging from the political to the environmental and musical, this event’s 3rd edition opens with a world premiere (Bill Gallagher’s Runner, about a Sudanese track Olympian) on Thurs/5, and continues through Sun/5 at the Smith Rafael Film Center and Cinearts Sequoia in Marin County. For the complete program, click here.

Among the films opening this Friday that we couldn’t see by deadline are Long Shot, a comedy romance by Jonathan Levine (50/50, The Wackness) with Charlize Theron and Seth Rogan that was well received in its SXSW premiere the other month; Ask Dr. Ruth (at Opera Plaza), a documentary portrait of famed nonegenarian sexpert Ruth Westheimer; another nonfiction portrait, Hesburgh (at Metreon and Elmwood), about an incredibly well-connected Catholic priest, educator and civil rights activist whom some consider one of the great figures of America’s 20th century; and East L.A. good brother/bad brother crime drama El Chicano.

Gan Bi’s Long Day’s Journey Into Night (at Embarcadero and Shattuck) is not Eugene O’Neill but a visually lush Chinese neo-noir; Bardo Blues (at the Roxie), a Thailand-set independent US feature involving spiritual questing and mental disability; Clara (at the 4-Star), a sci-fi love story with reportedly more real science in its fiction than is usual for the genre; and (also at the 4-Star) Tell It To the Bees, a 1950s tale of small-town British pride and prejudice. Actually, we have seen that last-named, but if you can’t say something nice… we’ll shut up now.

Babylon
This creditable slice-of-life drama about life in London’s sound system (i.e. mobile disco) reggae underground premiered at Cannes in 1980 but was never released in the US, supposedly because it was “likely to incite racial tension.” (Keep in mind that the prior year, American exhibitors had been scared by a few instances of violence at theaters showing gang-themed The Warriors, which resulted in several faintly similar films’ releases being curtailed or dropped.) It’s finally getting seen here in a new restoration.

Shot by future Oscar winner Chris Menges (of The Killing Fields and The Mission), directed by Italian emigre Franco Rosso, its loosely plotted script has a crew of youthful black protagonists running an obstacle course of everyday indignities reflecting rock-bottom English racial relations at the start of the Thatcher era. Their travails of poverty and prejudice include one character getting chased on his walk home at night by what we assume are racist thugs—but they turn out to be police, and no less abusive for that. You’ll be glad the almost impenetrably thick patois of the slangy dialogue is subtitled, though you’ll have no problem grokking a fine soundtrack by The Slits’ Dennis Bovell as well as various reggae acts. Opens Friday, Alamo Drafthouse. More info here.

Sauvage/Wild
What is it with gay movies about hustlers? Andy Warhol was making them before Stonewall. Yes, of course, the world’s oldest profession will always have its lurid fascination, and needless to say it provides an opportunity to undress attractive actors every 10 minutes or so. But after umpteen movies on the subject, is there anything more to say? If there is, writer-director Camille Vidal-Naquet’s debut feature doesn’t say it. Still, this French movie sorta recalls My Own Private Idaho, among other movies, and that’s all right.

Leo (Felix Maritaud, who was also in BPM and Knife+Heart) is a 22-year-old homeless hustler who smokes crack, has a bad cough, and looks a bit like a thinner, scruffier, taller Marky Mark. He seems to have no past, and no thought of a future. His present is consumed by tricks (mostly unpleasant, though he is a good sport), as well as successive men (Eric Bernard and Nicolas Dibla as fellow hustlers, Philippe Ohrel as a Good Samaritan) he becomes attached to. This is a well-made movie that’s somewhat pointless, but also kinda sweet in a depressing way, or vice versa. It’s the type of film whose enjoyment (or even profundity) may well mostly rest on just how cute you think the lead is. Opens Friday, Clay Theatre. More info here.

Dance Film SF Celebrates Merce Cunningham
He didn’t quite live to see it (he died at 90 in 2009), but great modern choreographer Cunningham’s 100th birthday is being celebrated anyway with this special event, which includes a panel discussion amongst former collaborators, and a reception between features. The two films are themselves separated by a half century, but both pay homage to the late birthday boy’s innovation.

Assemblage is a 1968 experimental film he made with director Richard Moore. In it, Cunningham and his company of (at the time) eight additional dancers stage a public “happening” in San Francisco’s then-new commercial development of Ghirardelli Square. Very much a product of its time, the hour-long film offers a psychedelic blowout of optical effects including split screen, strobing, superimposition, silhouetting, rear-projection, color-keying, kaleidoscoping—and, just occasionally, unmanipulated images of the dancers in real time and space. Made for local PBS station KQED, which was up to some pretty avant-garde things back then, it’s a delightful rediscovery.

After the reception, there’s If the Dancer Dances, a new documentary that depicts former Cunningham associates teaching his famous RainForest (also from 1968, when its original staging had visual contributions from Warhol and Jasper Johns) to the Stephen Petronio Company as part of the Cunningham Foundation’s work to preserve his creative legacy. Sat/4, Delancey Street Screening Room. More info here. 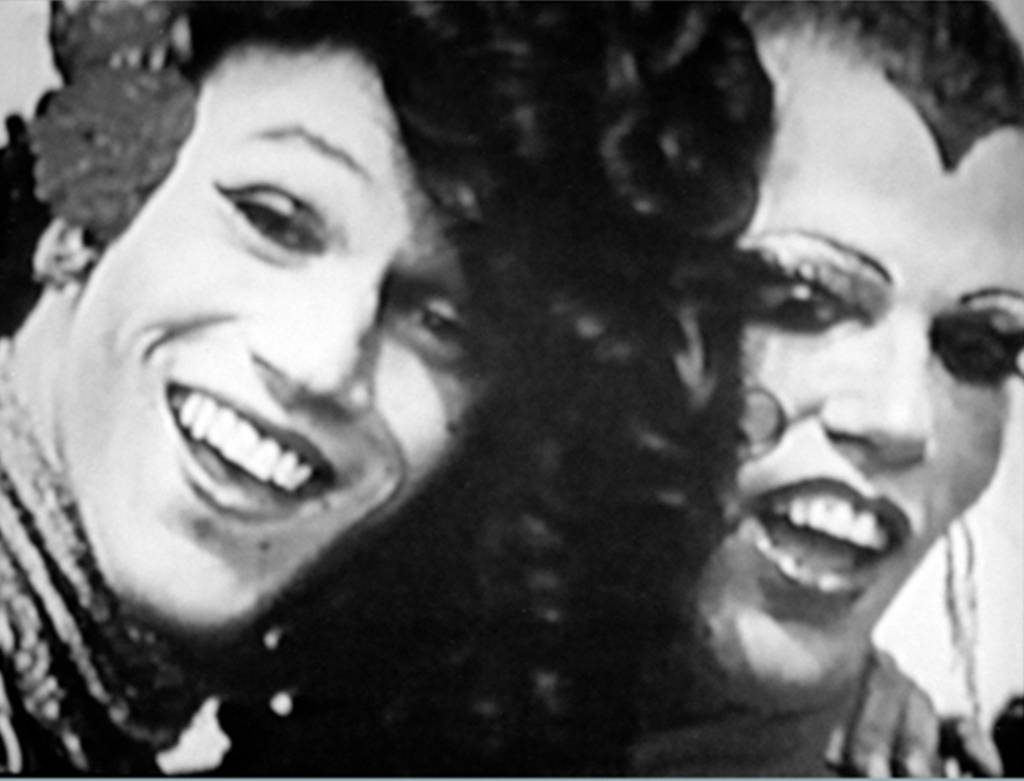 There’s a lot of colorful people-watching, not just of gay and lesbian participants, but also of straight supporters, and more than a few ambivalent-to-hostile gawkers. (They include the usual folk claiming “Jesus said” homosexuality is bad—a Biblical passage that has yet to be found anywhere but in millions of vivid imaginations.) Some folks are interviewed, drawing out a number of coming-out stories as well as brief debate over whether drag queens are inherently misogynistic. (Surprise!: Men in drag don’t think so. Actual women mostly do.)

As several here note, the community’s worst enemy at the moment was anti-gay activist and singer Anita Bryant. This alone lends Gay U.S.A. a poignancy, since who imagined the far greater trials that were soon to come? Anyway, this 78-minute slice of exultant celebration and political pulse-taking is an invaluable time capsule, right down to the terrible “gay pride” songs soundtracked. Local filmmaker Jenni Olson will discuss the film and its preservation post-screening. Tues/7, Roxie. More info here.

Media Archeology: Incredibly Strange Music 2
Get your retro-technology fix on at this Other Cinema program celebrating the 25th anniversary of erstwhile 8-Track Mind Magazine editor Russ Forster’s So Wrong They’re Right, a documentary that in turn celebrates collectors and aficionados of the 1970s’ clunkiest audiophile antique, the eight-track tape. (Among those interviewed are my erstwhile Boston neighbor Abby Lavine.) Forster himself will also deejay, screen clips, and play the theremin. Plus other instruments from yesteryear, and promo shorts featuring 60s garage psych-pop and rock legends like The Seeds, Chocolate Watch Band, The Strawberry Alarm Clock, 13th Floor Elevators, and others from the Nuggets and Pebbles collections that I should certainly hope you already have. Sat/4, Artists Television Access. More info here.

The Nude Vampire often plays like a Bataille story, introducing its protagonists as fleeing from figures in grotesque animal masks, as freeform jazz squalls on the soundtrack. Things don’t get much more logical from there, as a decadent tycoon’s son probes into dad’s involvement in both a suicide club and the pursuit of immortality through vampirism. A coolly Eurochic variation on familiar exploitation themes, with plenty of (female) nudity, this eccentric exercise in the macabre and ritualistic will seem pretty strange to the uninitiated, yet it’s also one of Rollin’s glossiest, most accessible films. Tues/7, Alamo Drafthouse. More info here.

Previous articleSix years of 48hills! Come celebrate with us
Next articleLife is a ‘Vanity Fair,’ old chum

Plus: A trainwreck Val Kilmer self-documentary that still rivets, a stylish goof in homage to a Dominican legend
Read more
Movies