Mime Troupe tackles ignorance at its root in 57th season

ON STAGE San Francisco is a town that has always enjoyed its culture served with a heavy dose of social critique. That may be why the SF Mime Troupe, now heading into its 57th season with the July 2 opening night of Schooled, has been able to become such an institution.

This year, amid pleas for a Trump send-up, the Troupe decided instead to tackle social problems at the root. As you may have guessed, Schooled is a (“musical comedy!” director Michael Gene Sullivan is quick to remind) look at our troubled educational system.

Schooled open July 2 and 3 in Cedar Rose Park in Berkeley and then transfers to Dolores Park on San Francisco for its legendary July 4 show, before touring other outdoor spots throughout the summer. 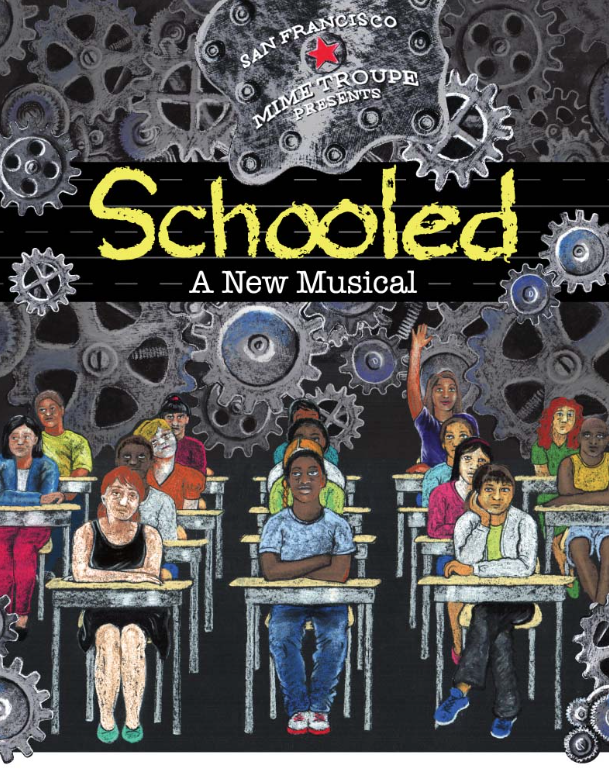 The Mime Troupe has roots that go back to 1957, to the Actor’s Workshop where a young mime and actor named R.G. Davis developed a political pantomime project.

In 1965, a multi-racial cast including Davis took a risk and staged A Ministrel Show, or Civil Rights in a Cracker Barrel. It proved to be so popular that the Student Non-Violent Coordinating Committee (SNCC) helped the group to tour the anti-racist production around the U.S. Ever since, the group has made a diverse crew and cast a priority, instituting official affirmative action hiring practices in 1974.

Edgy annual productions were rolled out. Funding rose and fell, depending on the federal government’s attitude towards the radical arts. Multiple programs to involve young people in the theater’s work were rolled out that continue to this day.

Right now the Troupe is riding high. Soon its Mission District facilities will get a major expansion that includes a black box theater.

That means that the group’s season will be extended into the winter, plus it will be able to produce more intimate shows that perhaps wouldn’t play well to al fresco crowds. Not to mention take in other companies who may have lost their physical theater to another round of evictions.

On the brink of Schooled and a new, year-round future in fighting the man onstage, a few of the SF Mime Troupe’s key figures answered a few questions from 48 Hills. They told us about what it means to be an enduring radical institution in a city changing as rapidly as ours.

48 HILLS How did the Troupe hit upon the education theme this year?

MICHAEL GENE SULLIVAN (CO-WRITER AND DIRECTOR OF SCHOOLED) Last year’s show Freedomland was about the systemic violence of the police directed at black men in America, and that got us thinking about how much we’ve backslid in this country regarding civil rights. How did that happen? In part it’s from a lack of basic education — making sure history is taught and valued, making sure students know the events, politics, and policies that that got us where we are. Many school districts don’t teach about political oppression in the United States because the factual events make conservatives and reactionaries uncomfortable. How many years before Occupy Wall Street is wiped from history?

At the same time our audience were saying we had to address the rise of Donald Trump. But we realized that these two issues were linked. The rise of Trump is due in no small part to a lack of basic understanding of democracy on the part of his followers. Again, education is one of the keys to actual change in this country.

An intro to the Mime Troupe, including scenes from 2015 production Freedomland, which examined surveillance culture and race-based police brutality.

48 HILLS Were schoolkids/parents consulted on the plot?

MICHAEL GENE SULLIVAN Most people don’t know that the Troupe has two school programs — the Youth Theatre Project, in which we invite students from underserved communities around SF to come to our studio to study different aspects of play creation, and the Young California Writer’s Project, where we send one of our playwrights into a school for 10 weeks to mentor students in writing plays on issues about which they feel strongly. These two programs give us contact with teachers, students, administrators, and parents across San Francisco, and were a tremendous asset in creating this show. In addition my wife (Mime Troupe actress Velina Brown) and I have a son in public school in SF, as do Troupers Keiko Shimosato-Carriero and Michael Carreiro. So that helps!

48 HILLS Blake, what’s your favorite part about your role on the team?

BLAKE MORE (COSTUME DESIGNER) Everything! As a designer, the collective process is different than what we are used to. Everyone has an opinion, and everyone’s opinion shapes the final outcome. It really is collaborative, and sometimes this can be a bit overwhelming for someone who is used to working with all the other variables pretty much in place. Here, things are not “set” but instead in flux all the time — even up to opening day in the park — so we have to stay open and willing to change, knowing most of the time it is for the better. I love this dynamic work environment as it keeps my ideas moving and keeps the feeling fresh and alive. You definitely have to be a creative control freak and simultaneously relinquish all control to work with the mime troupe! Koans abound here!

BLAKE MORE I haven’t had any Super Bowl-worthy disasters. Perhaps the biggest wardrobe fail I experienced was the time the director rejected a look I was really proud of — you know, he killed my darling. This happened in 2012, when we were doing The Greater Good. There was an ‘80s flashback musical number, and I put everyone in khakis, polo shirts and penny loafers … men, women, polo colors of the rainbow. I was going to make a spoof logo for each, but in dress rehearsal it was clear that the director hated it, and well, i had to start all over.  In truth, every single time I saw that scene for the rest of the summer, I felt little pings of resentment, cause I still think that iconic preppy look worked better with the song!

48 HILLS Michael, you’ve been a Mime Troupe actor since 1988. How has the group evolved over the decades?

MICHAEL GENE SULLIVAN That’s a tough question. When I came to the Troupe it was already a collectively-run, professional, multi-generational, multi-ethnic, gender-balanced, family-friendly theater fighting for social and economic justice, performing free theater in underserved communities. So when it comes to being diverse in leadership the Troupe was leading the way a long time ago.

I guess the biggest change has been the drying up of funding, and what it has meant to the collective. We’ve been forced to become much leaner, and the collective has had to fill in whenever and wherever needed. Despite this. we’ll still refuse to be the “AT&T/ Oracle/Facebook/McDonald’s/ fill-in-the-Bank Mime Troupe” because we feel corporate funding imperils the integrity of theater, which should be the entertaining, passionate voice bravely speaking truth to power.

48 HILLS What will the expanded brick and mortar space mean for the Troupe?

MICHAEL GENE SULLIVAN Basically it will mean we can more easily share our space with the community, and it give us a space to try new things. There are so many smaller, more dramatic shows the Troupe would love to perform or create, and which are not right for the parks. For example, years ago I wrote a stage adaptation of Orwell’s 1984. It’s wrong for the parks, but other companies have performed it across Europe, Central and South America, Australia, Asia, and next year maybe in Ukraine and Turkey. But the Troupe can’t do it because it’s an intimate, indoor show. So there’s that. Also, since space in SF has become so ridiculously expensive we could become a space for other homeless theaters and community groups. At a time when the City has lost so much we want to be able to support those organizations and theaters that are hanging on in the city they love, giving them a place to voice the arts and passions overlooked and ignored by the new aristocracy.

MICHAEL GENE SULLIVAN The Mime Troupe has always been democratic socialism in action, and that will always be needed. We are here to point up the contradictions of capitalism, and what better place to do that than in a city that on the one hand prides itself on inclusion, while on the other pushes all but the economic elite out of town? A city with a rich history of unionism, but where a union wage isn’t enough for a studio apartment? This is a city that trumpets diversity while becoming less and less diverse, a city famed for the creation of music, art, and drama, but where musician, artists, and actors are evicted to make room for the latest wave of overworked tech workers?

BLAKE MORE I first saw the Troupe in 1990; it was “Rats” at Golden Gate Park. I was just walking by and was immediately captured. I stopped, sat down, laughed, wanted to cry, felt discouraged, felt encouraged, and in the end, put money in the bucket.  It stuck with me, you know. So when I heard about the summer workshop in 2001, I jumped on it. I never left, because I saw the relevancy of this work. I do not want to be one of those frogs that gets boiled alive because I didn’t notice the water was getting hotter.