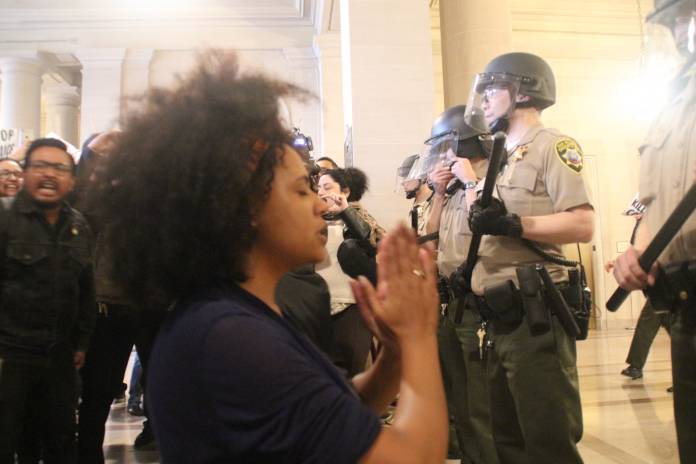 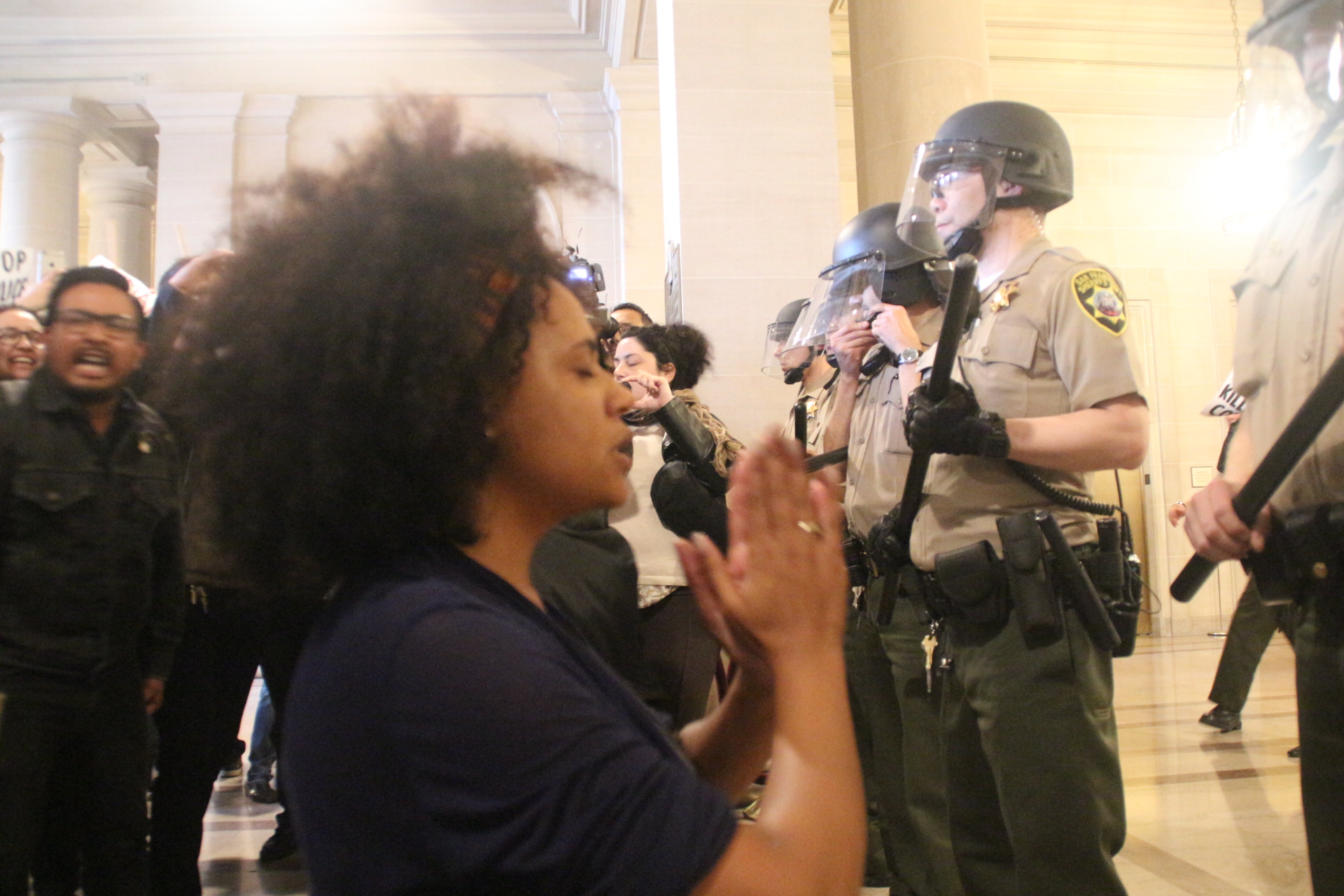 ... plus big landlord money pours in while supes try to defend Sanctuary City -- and journalists protest after sheriffs injure 3 at City Hall demonstration

The Frisco Five have changed tactics. The hunger strike is over, and they and their supporters are moving to large-scale protests, starting Monday/9. The group has called for a day of no business as usual and is urging people to show up at City Hall in the morning for a peaceful picket. I suspect it will be a large crowd.

Early voting also starts Monday/9 at City Hall, and the Reform Slate for Democratic County Central Committee was planning an event to encourage people to get out and vote, but it’s been cancelled out of respect for the Frisco Five picket. Which I think everyone involved will agree should not stop anyone from voting.

Absentee ballots have already been mailed to some areas, so the election is already under way.

One of the more dramatic bits of news about the June election, which is already full of dramatic big-money influence, is the role that Thomas Coates is playing. Coates is the wealthy southern California landlord who has spent much of his life trying to get rid of rent control in California. He has just put $19,500 into the Supervisor Mark Farrell for San Francisco Committee, which exists to promote measures that Farrell supports, and $25,000 into the Yes on B campaign, which is Farrell’s park’s measure.

Ron Conway, the city’s biggest political bully, also put $19,500 into the Farrell committee, which hasn’t spent the money yet.

Oh, and on the sleazy tactics front: There’s a mailer out there from the real-estate slate, promoting the conservatives for DCCC, which somehow has John Burton’s name and picture on it. Burton isn’t part of that slate; in fact, he’s working with the Reform Democrats to get the real-estate people the hell out of Party leadership.

The Chron’s Republican (yes really) columnist, Debra Saunders, asked yesterday why the supervisors would support allowing 16- and 17-year-olds to vote when they also support raising the age for purchasing tobacco products to 21.

It’s a pretty dumb question – my feelings on allowing young people to vote are pretty clear. Voting encourages community responsibility; smoking does the opposite.

I will say this: I never supported the increase in the drinking age from 18 to 21, and a lot of college presidents agree with me – it tends to encourage binge drinking and keep young people from developing a more responsible relationship with alcohol.

But tobacco is different – it’s a nasty product that, when used as intended and directed, always causes serious health problems and is often fatal.

Let’s put that aside, though, because there’s another issue here about the Age of Majority that Sanders and many others who talk about this seem to overlook. And that’s the military.

Right now, any 18-year-old man in the US can legally be drafted and forced to serve in the armed forces. Soon, that will be extended to women. There’s no draft now, but there could be, and if you don’t register at 18 you can’t get college financial aid.

The day you turn 18, you can join the military voluntarily. That’s a way bigger deal than buying a drink or a smoke or voting.

If we don’t think 18-year-olds are responsible enough to buy alcohol, what makes us think they are in their right minds when they sign up to be cannon fodder in wars declared by people who they were too young to vote for?

How about we synch up the age for drinking and joining the armed forces?

The Board of Supes will decide Tuesday/10 whether to send to the November ballot the measure by Sup. John Avalos to allow the youth vote in local elections. It’s pretty clear that he has enough votes. I wonder if the mayor will oppose it.

The supes will also vote on a measure that so far the mayor has not supported – a rule that would ban the use of any city funds to enforce federal immigration law, except for people who have been convicted of a violent felony and are charged with another violent felony.

This, of course, is the battle over whether the SF Sheriff ought to call the feds and turn in people who might be in the country illegally. Sheriff Vicky Hennessy says she should have the right; five supervisors (Campos, Avalos, Kim, Mar, and Peskin) disagree.

They will probably get a sixth vote. Again: Is the mayor going to veto this?

And hey, Mr. Missing Mayor Himself will be at the board meeting! Ed Lee’s public appearances have been pretty limited recently, but the City Charter says he has to appear once a month before the supes, and Tuesday is the day.

Mr. Mayor: On May 1st, after many years of struggle and delay, we finally launched CleanPowerSF. But, in order to achieve our long-term goal of creating green jobs by building out renewable energy facilities, we need to quickly expand our customer base. Have you signed up for CleanPowerSF’s SuperGreen option? If not, will you pledge to sign up? Will you work with me to expand our publicity campaign for CleanPowerSF? Can you use your extensive connections to San Francisco’s business community to help promote CleanPowerSF?

This is the mayor who repeatedly tried to derail the public-power program and called PG&E “a great company.”

Remember the Super Bowl, that civic disaster that had all kinds of impacts the NFL wouldn’t pay for? The Budget and Finance Committee will hold a hearing Wednesday/11 on the economic impact of that giant event. The city controller will be presenting a report. Can’t wait.

We will be filing a complaint Monday with the SF Sheriff’s Department over the way that reporters, including 48hills correspondent Sana Saleem, were treated at the Friday protests. Juan Gonzalez, who chairs the Journalism Dept. at City College, will also be complaining; two of his students were injured, too. The Media Workers Guild is already on board, and other groups will be joining us.

It’s simple: Law enforcement officers can’t be injuring reporters. I realize that these protests can be tense, but reporters have every right to be there, to witness, record, and tell the public what’s going on without fear of being victims of police violence.

If you want to see a fairly alarming video that shows how Sana was treated, check it out here.

Oh, and on the matter of the Academy of Art University, which appears to be one of the city’s biggest law-breakers: The Planning Commission will have yet another informational hearing Thursday/19 on the school’s master plan. But in the meantime, the AAU’s lawyer, Jim Brosnahan, who is a highly respected attorney with a long record of good works, seems to have done something really stupid.

Brosnahan told reporters last week that the reason City Attorney Dennis Herrera is suing the school has nothing to do with about a decade of illegal activity (and by the way, WTF is up with the Planning Department that Herrera has to do this? Aren’t there laws that the planners are supposed to enforce?). No: It’s a vendetta because AAU President Elisa Stephens backed Ed Lee over Herrera for mayor in 2011.

That’s a long time to hold a grudge – but the bigger issue is this: Who the hell cares who Stephens backed for mayor? She’s not a political player, nobody in town thinks her endorsement matters, and if she or her lawyer think she mattered in any remote way in 2011, they are highly delusional.

Brosnahan, of course, can’t stick to the facts of the case – because that’s a major loser.

A beautiful day, a festive parade—and a spirit of fighting back against a terrifying Supreme Court.
Protest

That's just one of the many key messages that the news media have missed.